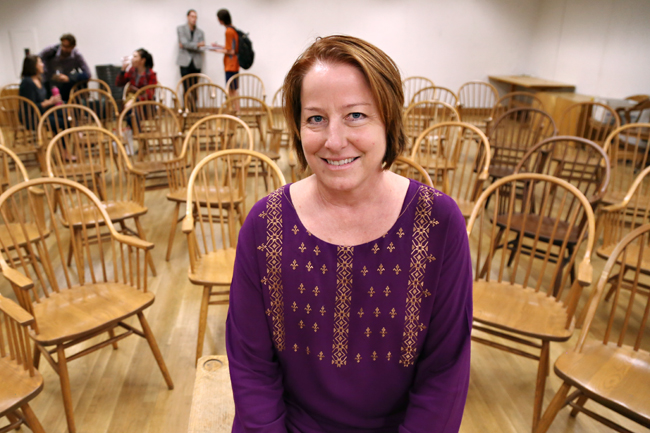 Urban designer Jana McCann spoke at a forum in Goldsmith Hall on Friday about the development projects she has worked on in the Austin area.

At the event hosted by the School of Architecture, McCann, CEO of McCann Adams Studio, said her work has predominantly been in Austin, but she has completed projects in the United Kingdom and France as well.

According to McCann, there is a huge difference between Europe and the U.S. when it comes to participation attitude on urban development. She said her time working on the Paris Metro service helped her realize these differences.

“During the project, there was no public engagement,” McCann said. “Plans were figured out by engineers, and there was a high trust of government on this project. The only public interaction was informing citizens on the project’s progress.”

She said, when she was there for the opening of the station, it was strange to see citizens so proud of something in which they had no involvement.

Since being back in Austin, McCann has been involved with planning the Mueller subdivision. The city decided to develop the former site of the Robert Mueller Municipal Airport in 2004 by adding a market center, park and bike trails.

In 2013, McCann helped design the newest addition to Mueller, a gathering and hangout spot called Paggi Square. The square includes an attraction called pétanque, which is a lawn bowling game created in France. Another development McCann said she was proud of was the Waller Creek project. The first part of the project dealt with addressing the major flood problems that come to downtown and other areas in the district.

“I really liked that she showed the European practice versus the way practitioners do it now in the U.S.,” Rowlinson said.  “So much of public participation in other parts of the world is unheard of. Here in America, participation, in ways, feels like a town hall meeting.”

City Forum hosted the event, along with architectural graduate students within the community and regional planning program, to educate students and faculty on public engagement within urban development.