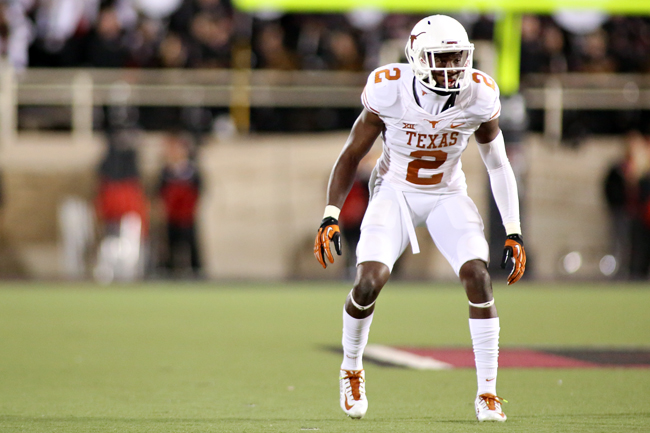 Although senior safety Mykkele Thompson hasn’t missed a game in his four years at Texas, a few of his competitions are a little hazy.

It’s not because the multitude of games blur together, but rather, Thompson literally played with impaired vision through his first three seasons.

When head coach Charlie Strong came to Texas, he realized Thompson wore glasses off the field but didn’t ever wear corrective lenses at game time. Concerned, Strong asked the safety from San Antonio why.

Through the conversation, Strong discovered that Thompson had been wearing glasses since the ninth grade — seven years earlier. And yet, through 39 college games and a slew of high school competitions, Thompson stepped on the field without contacts. Thompson played through his blurry vision, performing well enough to rush for 3,614 yards and 48 touchdowns in high school and garner recognition as ESPNU’s 60th-best athlete.

Through his first three seasons at Texas, he practiced well enough to secure playing time in every game and start 18 of the 26 games he played in his sophomore and junior years. On the field, Thompson racked up 144 solo tackles through three seasons. But one statistic remained low: Through 39 contests, Thompson had just one interception.

“You don’t start 30 games and have only two interceptions for a career,” senior cornerback Quandre Diggs said. “I always give him a hard time, but that’s my best friend, so I can do that.”

Although Diggs joked with Thompson in good spirits, the inconsistency was evident. Strong decided to test out Thompson’s vision as they watched a double move against Baylor. Strong asked Thompson whether he saw the move, and Thompson admitted he did, but he saw it “kind of late.” Before the next game, Strong had Thompson fitted for contacts.

Since then, Thompson’s production has increased. His 11 tackles against Iowa State marked his best since 2012, and against Texas Tech on Saturday, he intercepted his first ball in 12 months. It took him 36 games to intercept his first pass, but he intercepted his second pass just 4 games after getting contacts. One thought came to Strong’s mind.

“I said, ‘You never would’ve caught that ball if you hadn’t had those contacts in,’” Strong said. “He’s been wearing his contacts now.”

With new clarity, Thompson’s play on the field has changed. But it’s not just a physical improvement. Diggs says Thompson’s mental game has improved as well.

“I definitely think [getting the interception] makes him a more confident player,” Diggs said. “You can tell just by yesterday [in practice] that he’s a way more confident person.”

As Thompson contributes more to the team and builds his confidence, suddenly it all becomes clear. He begins to see football through a new lens — finally, one with corrective vision.