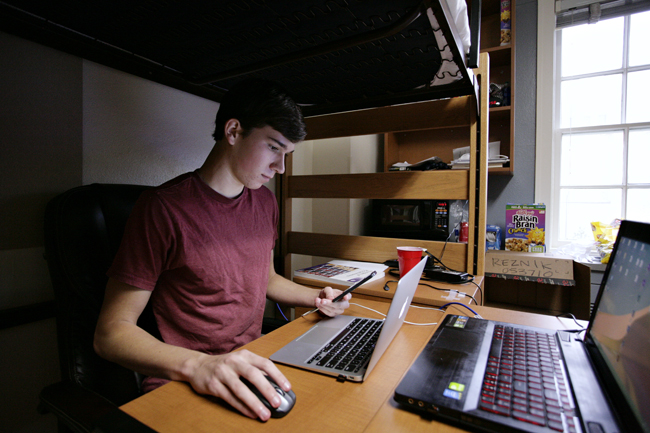 Instead of binging on Netflix or playing video games this summer, radio-television-film sophomore Oliver Reznik taught himself how to code.

“I was just kind of bored most of the time, so I decided I’d learn some kind of valuable skill,” Reznik said. “I learned how to code and make iPhone games.”

Reznik created the app Circle Storm in his dorm room last month. Circle Storm is his second game to be accepted onto the iTunes App Store and a sequel to his first game, Circle Assault. He said each of his apps had to go under a 10-day review to be accepted into the store. ITunes did not accept his first ever submission, a utility that changed the color of the phone screen.

“If it’s your first app and you didn’t really put too much effort in making it look nice or work nice, and it crashes all of the time — they won’t put it on the store,” he said. “If it functions fine and it actually has a function, they’ll put it on.”

Between Circle Storm and Circle Assault, there have been more than 2,000 downloads of Reznik’s games. In Circle Storm, the object of the game is to avoid hitting the red circles by tapping the screen and reversing the direction of the main black circle. In a way, the game is the opposite of ping pong — instead of hitting the circles with the object, the objective is to avoid hitting the circles. Adam Peptinger, mechanical engineering sophomore and Reznik’s roommate, said he likes the game because of its fast pace.

“You have to think quickly,” Peptinger said. “It’s simple in concept, but it’s unique every time you play it.”

Before releasing either of the games to the public, Reznik enlisted the help of Peptinger. Peptinger would play the games and give Reznik suggestions.

“I was kind of like a guinea pig,” Peptinger said.”Some of the suggestions I gave made it into the game, but some of them I’m still pestering [Reznik] about.”

Reznik said his skills as a filmmaker have helped him in learning how to code mobile games.

“When you’re making a film, you have to be concerned about how the audience is feeling, and that’s basically the same thing with games,” Reznik said. “In that regard, that’s kind of a translation of skill between the two disciplines.”

Sarah Abraham, computer science graduate student and creator of Akula Games, said making iPhone apps was, at first, just to teach herself iOS development. She said having these apps has helped her contract for other companies and make contacts.

“I personally found that having a completed app published on the App Store gave me a lot of credibility to companies and clients,” Abraham said.

Reznik agrees that learning how to code has created opportunities for his true goal — becoming a writer and director of feature films. Although he plans to pursue film, he wants to expand his skills in the coding arena and create more types of programs.

“Ultimately, that’s where my passion lies, but I do really enjoy making game projects and other sorts of software projects,” Reznik said. “I’m looking into that as a sort of way to make ends meet as I set my goals as a filmmaker.”