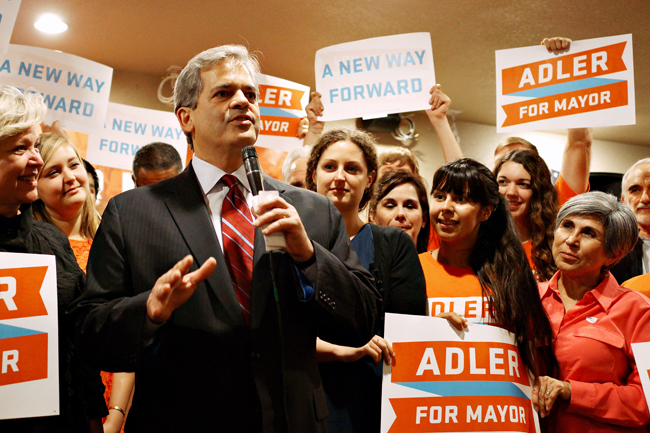 The Austin mayoral race will go into a runoff election between attorney Steve Adler and City Council member Mike Martinez.

At press time, Adler led the eight-man race with 37 percent of the vote, while Martinez received 30 percent.

The runoff election will be held on Dec. 16. Until then, the candidates will continue to campaign.

After first hearing about his lead in the polls, Adler said there is still a long way to go, but he said his lead shows that the city of Austin is ready for a change from the current system.

“I’m excited because I think that what the results we just heard show is that a majority of people in the city of Austin want to go forward in a new way,” Adler said. “And we’re really excited about that. We’re leading in the election.”

Adler said the new 10-ONE council structure presents the opportunity to change government in Austin and will provide more representation across
the city.

“We can take this opportunity with new leaders and new communities sitting at the City Council table for the very first time and change what we are doing in this city,” Adler said. “This is the opportunity to do that. Cities don’t have the opportunity to change government, usually, because things get institutionalized, and, with that, they don’t change.”

Despite being behind Adler, Martinez said he could still win.

“We are in it to win it, and we can win this election,” Martinez said.

In a speech at the end of his election night party, Adler said this election season was a chance to change Austin’s current government in order to improve taxes, utilities and the permitting process and also decrease poverty and the loss of diversity.

Martinez said this race is an opportunity to represent the middle class.

“It is about families who are struggling to make ends meet, who deserve the opportunity that Austin has for everyone,” Martinez said. “Everyone should join in the prosperity — not only a few. We should have policies that reflect that. We should have a mayor that fights for that, and that is exactly what we’re gonna do when we win this runoff.”

“I really support Mike because I know him as a person, and he would do a great job supporting the community and the city of Austin,” Hall said. “He could definitely solve our traffic crisis; he could manage it better and make it easier to maneuver through the city.”

Mayor Pro Tem Sheryl Cole finished third with 15 percent of the vote and conceded the election at her watch party Tuesday. Cole said she will still continue to be involved in bettering the city.

“I believe we live in a great city that cares,” Cole said. “I’ve been in the City Council for eight years, and I will continue to be involved in civic issues. If it’s not the PTA, I can find other organizations.”