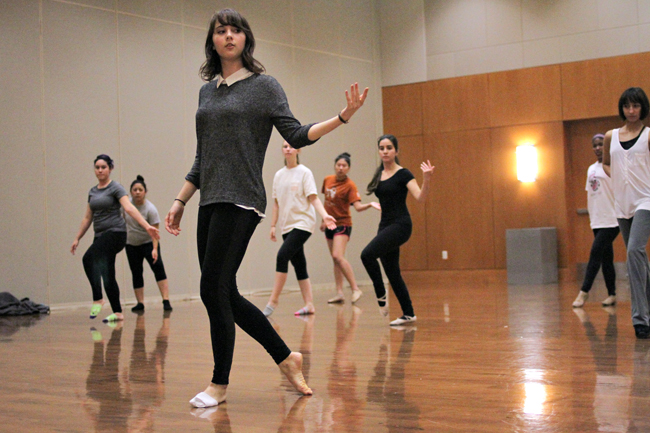 As of August, aerospace engineering freshman Amanda Arena had no idea how to dance.

“I didn’t know the first thing about it,” Arena said.

It was not until she joined Bend Bandits, a new dance and service organization, that Arena learned different types of dance and improved her skills by attending their weekly practices.

“I really had to learn everything, and I have learned it through this organization,” Arena said. “It’s really great.”

Bend Bandits is a dance organization with a service purpose — to bring free dance classes into middle schools in lower socioeconomic areas of Austin. Along with the free dance classes, the Bend Bandits plan to take their students to competitions and professional dance shows next semester.

From 5-9 p.m. in the Anna Hiss Gym on Friday, the Bend Bandits will host a dance workshop where attendees can learn contemporary, jazz and hip-hop techniques for $5. The money raised at the workshop will be used toward offering free classes and taking kids to shows and competitions. Neuroscience sophomore Kacee Dobbins pulled together a group of friends to form the organization last April.

“We feel like it’s important to show them the world of dance,” Dobbins said. “A lot of those students can’t afford to take actual classes at studios. Some of them have this crazy talent that they never knew existed. A lot of them don’t see things outside of the home they live in and the school that they go to; sometimes, that’s the only world that they know.”

In high school, Dobbins was a part of a similar program where she taught middle school students choreography. She said she wanted to bring that same idea with her to college.

“When I got here, because I decided not to be a dance major, I still wanted dance to be a part of my life, and taking normal dance classes was a little too stringent for me,” Dobbins said. “Then, I thought, I want to create a dance [organization].”

The Bend Bandits are currently using their weekly practices to learn the dances they will teach to students in the spring. The organization has plans to go into two Austin-area schools next semester, but Dobbins said she hopes they can expand that further. The group has about 16 members, and Dobbins said that small number makes it difficult to cross over into more schools.

Radio-television-film freshman Elisha White has been dancing since she was three and joined Bend Bandits in August. She said she chose to join Bend Bandits because she liked the idea of opening up other people to the world of dance.

“I think it’s important to open [younger kids] up to different styles of expressing themselves,” White said. “I think dance is a good opportunity for that. The fact [that] our organization can take it to these kids for free is really awesome.”

Although the group is still fairly small, Arena said she’s enjoyed being able to learn a new skill and looks forward to teaching that skill to other people.

“I really want to teach other kids because I know, growing up, I really wanted to have that, and I never really got that,” Arena said. “I’ve learned a lot because I knew nothing about dancing. The best part about that is I get to spread that to other people.”