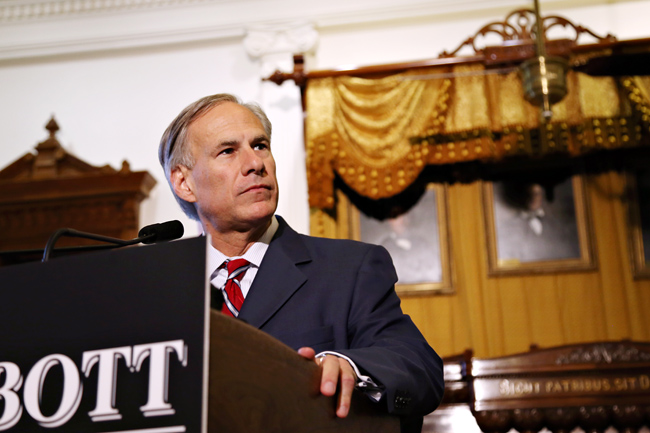 “It is an honor to have been elected governor of the state of Texas, but, as I told people last night, it’s time to put the election behind us and begin the process of getting to work, and that is exactly what we are doing,” Abbott said. “The people of Texas elected me to do a job and we began working on that job today.”

Abbott, the current state attorney general, said he has several different meetings scheduled throughout the week, including a meeting with Kyle Janek of the Health and Human Services Commission on Wednesday afternoon to discuss the Ebola virus.

“Things have improved with regard to the current situation about Ebola, and the extent to which Texans can be exposed to the disease,” Abbott said. "However, we can never let up on these challenges because of how deadly the disease is. … We need to be vigilant going forward knowing that Ebola still exists in West African countries and could travel to other places.”

Abbott said Texans can expect him to live up to the promises he made during his campaign — including job creation, improving schools, border security and infrastructure.

Abbott also said if legislation allowing firearms to be carried openly in public came to him, he would sign it into law.

With big pickups on Tuesday, Republicans took control of the U.S. Senate. Abbott said the new Republican majority is a reflection of what the American people want.

“A message was sent by Americans last night,” Abbott said. “It was a message focused on policy priorities. Americans want people in office to address their priorities. … [They] want the government to get out of their lives as much as possible."