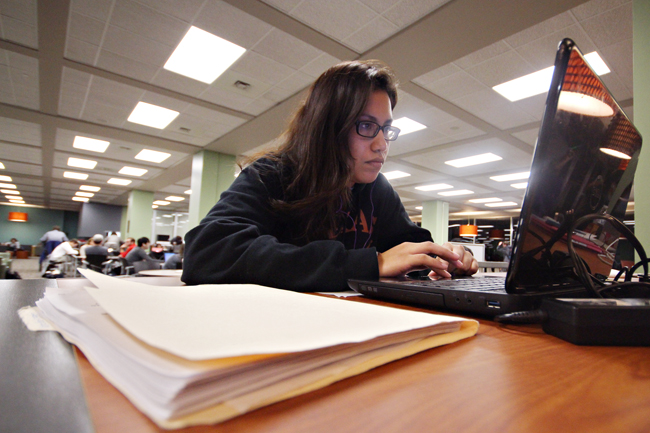 The Perry–Castañeda Library is no longer the only study spot on campus to be open for all-nighters.

On Wednesday, Student Government President Kori Rady announced in an email to students that the Flawn Academic Center will remain open 24 hours a day, seven days a week for the rest of the semester. The FAC previously closed at midnight on weekdays. The plan to extend the hours has been in the works since the start of the semester, when Rady co-authored a resolution with other SG members in support of the initiative.

“Initially, I was confident that it would get done this semester, and it did,” Rady said.

This is not the first time SG has worked to open a UT facility for 24 hours a day. In 2012, SG worked with administrators to open the PCL on a 24/5 schedule. Since then, the PCL has run on a 24/5 basis each semester, beginning around midterms.

According to government senior Alexander Dickey, who originally brought the idea of a 24-hour FAC to SG, having multiple study spaces open all day and night on campus is long overdue.

“If we’re going to cultivate young minds of the future, then we’re going to have to accommodate their odd times of sleeping, especially in the college environment where you’ve got cramming sessions all night,” Dickey said. “The PCL 24/5 is great, but why not make it all year round?”

Taral Patel, an author on the resolution to keep the FAC open on a 24/7 basis, said administrators and the FAC building management staff were supportive of having an around-the-clock study facility.

“As it came closer and closer, the administration really thought this was a vital thing that students needed,” Patel said.

Patel said he has also seen support from UT students for the 24-hour building.

“A lot of students have been wanting this option too, so I think it’s a perfect time for the FAC to be open 24/7 because finals are coming up,” Patel said.

To keep the building secure, Patel said they selected a security plan that hires three UTPD guards at $35,000 each per year.

Rady said they had to make few other technical changes to keep the building safely operating 24/7.

“We have security guards this semester that are going to be making sure students are safe,” Rady said. “There’s not too much too different in terms of logistic use. You just have to keep the lights on. And, of course, there are student proctors that are being trained to help students at the FAC when it’s 24 hours.”

Rady said the 24/7 FAC is in a trial phase, but if it is successful, it could become permanent.

“Everything is kind of a test in this kind of a situation,” Rady said. “You want to make sure people are using it, but of course, if no one is utilizing the extended hours, things could change. I’m confident people will.”