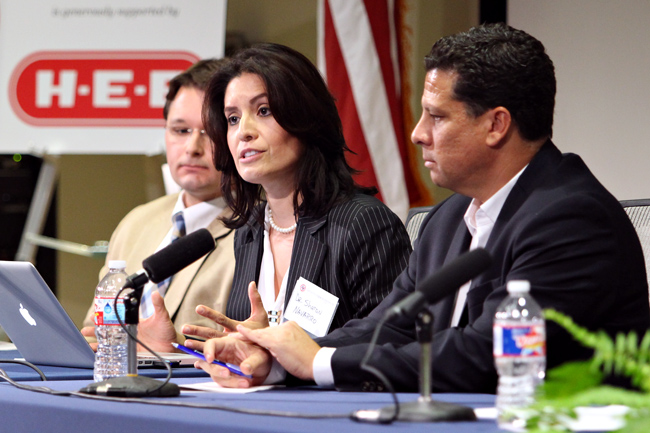 Professors and campaign professionals gathered at the Belo Center for New Media on Wednesday to dissect and analyze Tuesday’s election results at an event hosted by the New Politics Forum at the Annette Strauss Institute for Civic Life.

“Elections are kind of an imperfect way of measuring the will of the people, and they get less and less perfect, the fewer and fewer people who show up,” Lawrence said. “In a way, elections are all about who shows up.”

Actually we saw, in a continued trend, an increase in early voting so that we had about one-third of Texas registered voters actually voting before yesterday,” Lawrence said.

Voter turnout across the state has been low, but Lawrence said Texas had the lowest turnout in the country in 2010.

“I’m here to tell you that the early returns suggest that Texas was not dead last yesterday,” Lawrence said.

Ross Ramsey, executive editor and co-founder of The Texas Tribune, said turnout is always an issue when it comes to election time.

Lawrence said despite the meager voter turnout, there were more open races on Tuesday than there has been in Texas since 1906.

“So we had a really historic opportunity for voter engagement, but we saw it unmet,” Lawrence said.

Young voters are commonly the most underrepresented, and, according to Lawrence, this year was no different. Lawrence said her experience in the classroom has given her an idea of why this occurs.

“I can tell you, at least anecdotally, over the years of teaching, that the young people that I teach tell me again and again that one of the biggest reasons that they do not vote consistently is that they don’t feel informed enough,” Lawrence said.

Lawrence said young voters might also vote less than other age groups because they feel isolated from the major political parties.

“Of course, we know that for many young people, these days particularly, there’s not as much of a strong connection to political parties, to those traditional political identities of democrat and republican,” Lawrence said.

Edward Espinoza, executive director of the Texas Research Institute, said there was little the Democrats could have done to fend off Republican
opponents.

“Had the Latino outreach been better, that would have taken [Democrats] from 39 percent to maybe 43 percent, but there was no stopping that wave,” Espinsoza said.