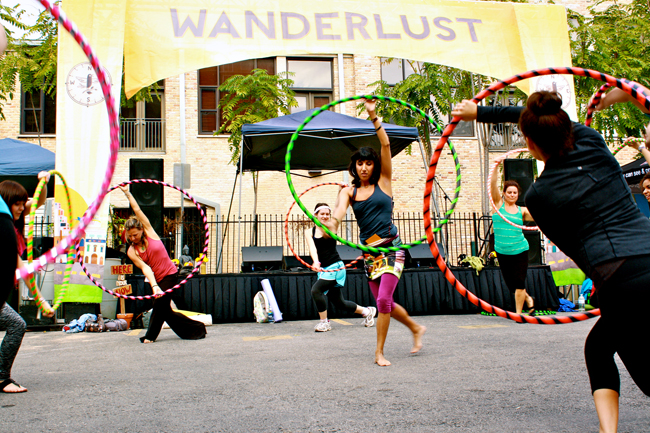 Avid yogis, hula-hoopers and yoga novices will be learning alongside each other on a shared mission of wellness and health this weekend. The heart of downtown Austin will serve as the backdrop of Wanderlust Festival, a three day, all-inclusive yoga festival.

While Fun Fun Fun Fest rages at Auditorium Shores, the second Wanderlust is set to take place on Fourth and Brazos streets from Nov. 6 to 9. Classes are offered at different times each day and range from stand up paddleboard yoga to black light yoga and include runs that will tour Austin’s most well-known destinations. Some classes aren’t based in yoga or running at all, such as the DIY fabric dyeing workshop.

The festival will include live music; DJ sets will set the scene during yoga classes. There will be vendors, a mixture of out-of-state and local businesses, ready to provide the festivalgoers with items like headbands and athletic clothing.

In addition to the world-renowned instructors recruited by Wanderlust to teach classes at the festival, local instructors are also participating.

“The state that students are in is a great opportunity to start learning great habits,” Roberts said.

According to Roberts, the negative stress relievers that college students tend to turn to only hide stress temporarily. He said yoga provides a quiet time to address problems and learn how to move past them.

“Yoga, as the antithesis to [more common stress relievers], is an opportunity where you are forced with confronting it,” Roberts said. “It’s just you on your mat for an hour. You’re in your head, and all you’re doing is breathing.”

Joanna Kutchey, co-founder of the Wanderlust studio in Austin, said that their studio has an inclusive atmosphere. She hopes to bring this same ideal to Wanderlust.

“I feel like we are so much more than a yoga studio,” Kutchey said. “We feel like our space is more of a community space.”

The growing popularity of different types of yoga has led to the creation of more classes at the festival.

“I think yoga has grown and evolved so much and continues to evolve,” Kutchey said. “It’s a fun way for people who are intimidated by a traditional yoga class to participate by coming to a black light yoga class or coming to a hula hoop class.”

Brown said that yoga gives her a healthy escape from the stress of day-to-day activities.

“You’re taking a little bit of time to turn introspective, and turn inward, shut out all of the noise, all of these fast-paced hectic problems,” Brown said.

Brown explained that she was very preoccupied as a UT student and had difficulty managing her stress. She said she wishes she had discovered running and yoga much earlier in life.

“It’s one of the most welcoming and comforting things to be a new person in a yoga class because there are people there who want to help you and show you what to do,” Brown said. “Do something that scares you.”

Roberts explained the festival is a social melting pot and an opportunity to be exposed to people who come from different backgrounds and experiences. He said participants will have the chance to take classes with some of the best teachers in the world and be inspired mentally and emotionally in their practices.

“There is a common denominator in the energy and the attitude of the people,” Roberts said. “It’s a very no-judgment zone.”