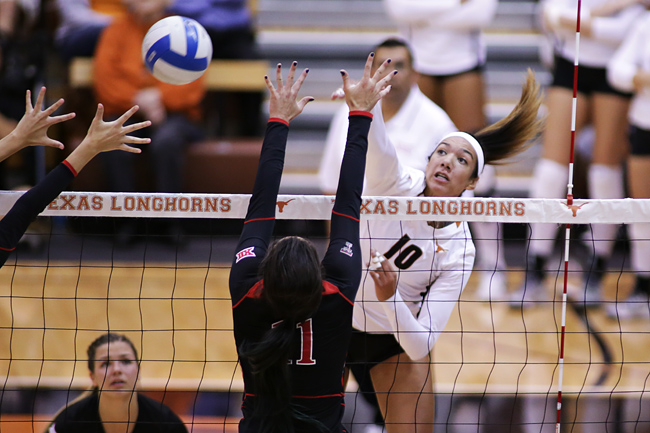 Texas volleyball left no doubt who the better team was in Lubbock on Wednesday night.

Texas dominated almost every statistical category — including posting a .262 hitting percentage to the Red Raiders’ .000 — en route to an easy sweep of Texas Tech.

Texas wasted no time asserting itself as the dominant team in the match, jumping out to a 4-3 lead and then going on a 7-0 run behind the serving of senior outside hitter Haley Eckerman. Eckerman racked up a service ace and a kill during the run, while senior middle blocker Khat Bell logged three straight kills during that stretch.

The second set proved to be a slightly more difficult set for the Longhorns. Texas jumped out to leads of 6-2 and 15-7, but Texas Tech hung around and managed to close the gap to as close as 18-15. However, kills by Bell and junior outside hitter Amy Neal, as well as a couple errors by the Red Raiders, allowed the Longhorns to win the set 25-18 going into the intermission.

The third set, by comparison, was much easier for the Longhorns. Texas again jumped out to an early 11-3 lead over Texas Tech behind the serving runs of Neal and sophomore middle blocker Chiaka Ogbogu. Ogbogu also added two kills during that run.

The Red Raiders tried to close the gap from there, going on a 6-2 run to trim the Longhorns’ lead to 13-8. But that would be as close as it would get. Texas fired back with a 5-2 run of its own on its way to a 25-13 set win to finish off the sweep.

Texas finished the night with the edge in every statistical category except attack attempts, which Texas Tech led 107 to 103. The Longhorns posted 39 kills, five service aces and eight blocks while the Red Raiders managed 24 kills, one service ace and two blocks.

Eckerman led the Longhorns with 10 kills, while Ogbogu and sophomore outside hitter Paulina Prieto Cerame each had seven kills. Cerame and junior middle blocker Molly McCage each posted five blocks, and freshman libero Cat McCoy led the team with 15 digs, as she has all season.