Basketball coach looks to improve in third season with Texas 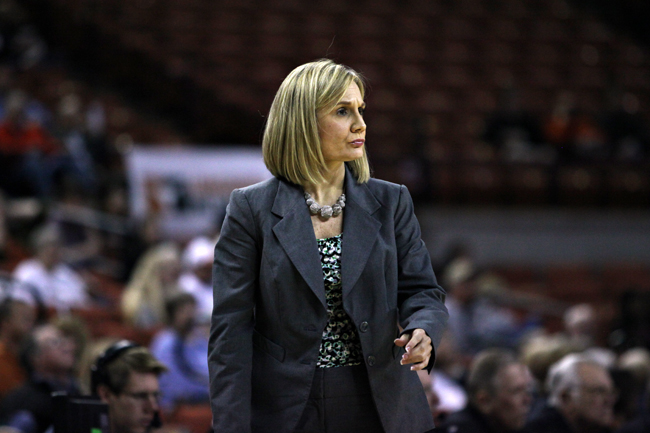 Nearly three years ago, newly named women’s basketball head coach Karen Aston sat in front of a room of familiar faces, thanking them for their belief in her and her efforts to make the team a traditional power in the sport.

“My job is to make Texas proud of the women’s basketball program,” Aston said. “I will do everything I can to get Texas where it needs to be again.”

Aston, a Texas associate head coach in charge of recruiting under Hall of Fame coach Jody Conradt from 2000 to 2006, took over a program that had not won a tournament game since 2008.

Aston believed the program needed a new direction and a change in culture.

“There is work to be done,” Aston said. “I understand that.”

The 2012-2013 season, Aston’s first full season as Texas head coach, ended with the Longhorns finishing at 12-18 overall and eighth place in conference with a 5-13 record.

“Those were the times that were difficult,” Aston said.

Despite the losing season, Aston said the coaches and the players learned how to deal with adversity and grow as a program.

“Last year, that was the elephant in the room. We were unfamiliar with each other,” Aston said at the 2013 Big 12 Media Day. “I didn’t know the players, and the players didn’t know me. Everyone has bought in now.”

That buy-in for Texas resulted in a 22-12 overall record in the 2013-2014 season — good for third place in the Big 12. Aston’s philosophy of aggressive and competitive play showed as the Longhorns topped the Big 12 in field goal percentage defense and rebounding margin.

Texas also made the postseason and won its first round game before it lost to Maryland in the next round.

Now, in year three, Aston and her coaches have a program selected as the preseason favorite to win the Big 12 and have preseason ranks of No. 9 in the Associated Press Poll and No. 12 in the Coaches Poll.

“You can tell the upperclassmen get what Coach [Aston] wants, and they’re just trying to coach and help us through that,” Akins said. “I want to contribute as much as I can and get them to go as far as they can possibly go. It’s Krystle and Nneka’s senior year, and I look up to them a lot. They deserve it, so just to get as far as we can.”

Reflecting back on the past two years, Aston said she thinks the team has a good blend of players for the first time in three years.

“It feels a little better than it did three years ago when I sat in this chair — a little less nerve-wracking,” Aston said in October. “I’m excited about the season beginning.”