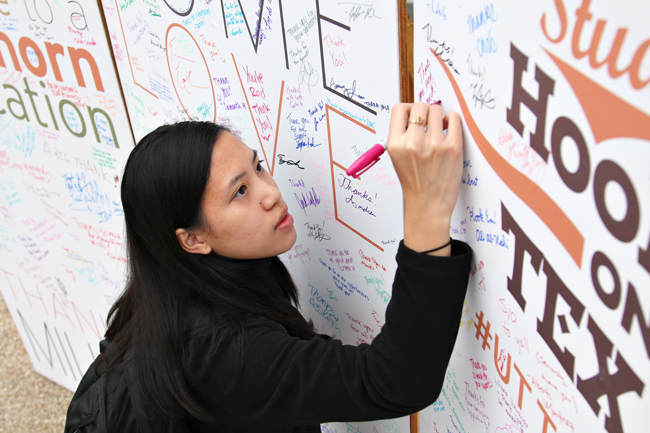 Students signed whiteboards on Gregory Plaza thanking the University’s donors as part of the University Development Office’s fifth annual Thanks Day on Thursday.

Marsha Reardon, the student philanthropy and special campaigns coordinator who organized the event, said Thanks Day was created in 2010 to educate students about the significance of donations to the University’s budget.

“The main idea is for students to say thanks to who makes school happen,” Reardon said. “They can learn that tuition and fees only pay for less than half of what the school needs, and, without donors and other sources, the school would have to close in November.”

According to Reardon, activities organized for Thanks Day included writing “Thank You” cards to donors. The day ended with a celebration in front of the UT Tower, complete with fireworks to recognize the success of The Campaign for Texas, the University’s eight-year, $3 billion fundraising campaign that ended in August.

“At the end of Thanks Day, we want to celebrate this by showing our donors the gratefulness of the students,” Reardon said.

“My signature course encouraged me to volunteer for the event,” said Kayla Marks, speech pathology freshman. “And I have noticed that a great goal for Thanks Day is to form a mutual appreciation for students, campus and faculty.”

In addition to the activities offered on Gregory Plaza, Reardon said students also had the opportunity to get involved in the event by posting on social media using #UTTHANKSDAY and posting their stories online.

“These activities have left an impact in the community,” Reardon said. “Students become more aware of how their school keeps on going and also realize the impact they are creating.”

According to Reardon, there has been an increase in young alumni donors since the first Thanks Day.

“Students are not the only ones who are participating,” economics freshman Shelby Gaylor said. “Teachers also come and participate, which, for me, shows the event is serving its purpose.”