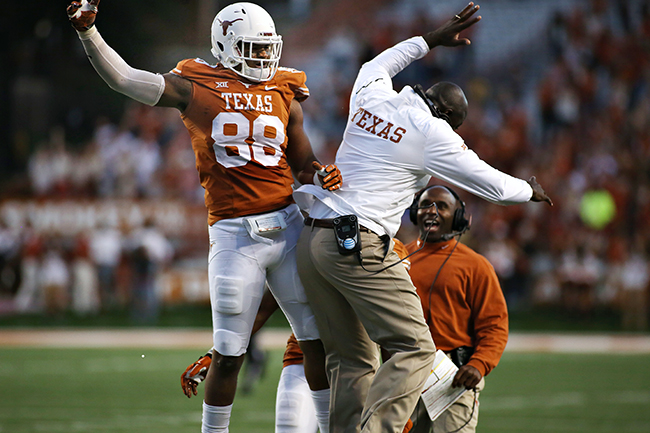 Entering the weekend, the Texas football season had been mostly noted for its missed opportunities. The Longhorns entered their matchup against No. 23 West Virginia 0-4 against top-25 teams, riding a seven-game losing streak against ranked teams.

All of that changed Saturday when the Longhorns played their best half of the season in the game’s first 30 minutes, and the defense held strong in the second half to beat the Mountaineers, 33-16.

“It’s a really good win for our program,” Strong said. “We just, week by week, we continue to get better.”

The Longhorns managed to strike first on a 2-yard touchdown pass from sophomore quarterback Tyrone Swoopes to senior tight end Geoff Swaim. The Mountaineers responded with a 48-yard kick return and managed to drive the ball inside the Texas 2-yard line.

However, the Longhorns held tough against the wall near the end zone, stuffing the Mountaineers on third-and-goal at the Texas 1-yard line. The Mountaineers came away from the drive with a field goal, but the goal-line stand made a statement.

“I think that kind of set the momentum,” senior linebacker Jordan Hicks said. “The crowd was into it; the defense was able to stop them. We got a few tackles for losses and held them there on the goal line. That’s gigantic.”

The duo was especially effective during the second quarter, in which the Longhorns scored 17 unanswered points, highlighted by two long runs from Gray.

The first went for 39 yards and a score, while the second run followed a 25-yard run by Brown, in which Gray hit the hole for a 40-yard gain. Gray capped the drive from two yards out to give the Longhorns a 21-3 lead.

“[The] offensive line did a great job opening holes,” Gray said. “They knew what we had to do to get the job done tonight, and they did it.”

On the other side of the ball, senior defensive end Cedric Reed dominated the Mountaineers’ offensive line with three sacks. Reed’s penchant for finding the quarterback was akin to his play last season, marking a bounce-back performance after recording only 1.5 sacks through the first nine games this year.

“Tonight, after I got that first sack, I went up to Coach [Chris] Rumph and told him, ‘Sacks come in bunches, so you better watch out,’” Reed said.

The Mountaineers ended up outgaining the Longhorns by nearly 100 yards but were held to a season-low 16 points and did not get into the end zone until early in the fourth quarter.

Texas won the battles on third and fourth downs, allowing West Virginia to convert only 3-of-17 third-down attempts and 3-of-5 fourth-down attempts.

The win was a step toward bowl eligibility for the Longhorns, who are now 5-5 on the season and need to win at least one of their final two contests. Despite defeating a top-25 opponent at home for the first time since 2008, some players were hesitant to call Saturday a signature win.