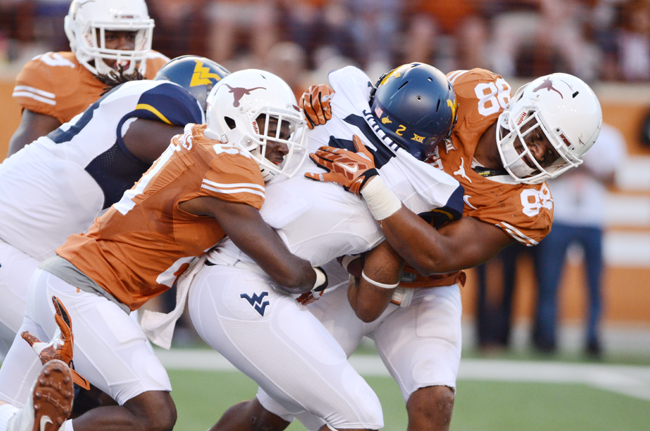 It was as if senior defensive end Cedric Reed bottled up all his frustrations from the first 10 weeks of the season and let them out against West Virginia on Saturday.

Reed opened the season as a preseason All-American and many believed he would be a top pick in this year’s NFL Draft. However, as the season wore on and he failed to make much of an impact in any of Texas’ first nine games, Reed’s draft stock plummeted along with hopes of him being an All-American or winning any of the awards for which he was initially watch-listed.

But Saturday, he reminded everyone just what he is capable of. The 6-foot-5-inch, 272-pound lineman was an absolute menace all afternoon and got in the West Virginia backfield on several occasions.

Reed finished the afternoon with 12 tackles, three sacks, a safety and a forced fumble.

Can you Diggs it?

While Reed has seen his draft stock plummet for the majority of this season, senior defensive back Quandre Diggs’ pro potential seems to increase each week, and the game against West Virginia was no exception.

Diggs spent most of his afternoon covering senior Kevin White, the Mountaineers’ best receiver and one of the top pass catchers in the entire country. White racked up plenty of yardage, but Diggs kept him out of the end zone and made a few huge plays in the process.

The most notable was an interception in the fourth quarter that helped Texas seal its victory. After getting beat on a similar play earlier in the game, Diggs jumped an out pattern and picked off West Virginia senior Clint Trickett, ending the Mountaineer drive and giving the Longhorn offense great field position.

“I knew I was going to get another opportunity, and, in my head, you’re going to beat me one time, but the next time I’m going to go make a play,” Diggs said. “That’s just what I did, and it comes from great film review [and] great study.”

From the moment he arrived in Austin, head coach Charlie Strong preached his affinity for run-heavy offenses. He was confident that his running backs — senior Malcolm Brown and junior Johnathan Gray — were the ideal tandem to lead the Longhorn offense.

But for the first eight games, a depleted offensive line and some less than convincing running back play forced Strong’s team to throw the ball more than he would have liked.

Over the last two weeks, however, Strong has gone back to the run and it has paid off.

As his young, patchwork offensive line continues to gain experience and develop chemistry, the running backs have exploded onto the scene, and Gray’s turn was Saturday.

The junior scatback totaled 101 yards and three touchdowns on just 10 carries against the Mountaineers. The most impressive of those 10 touches came early in the second quarter, as Gray juked a West Virginia defender and stretched for the pylon on a 39-yard touchdown run.