Ride along with a UTPD officer 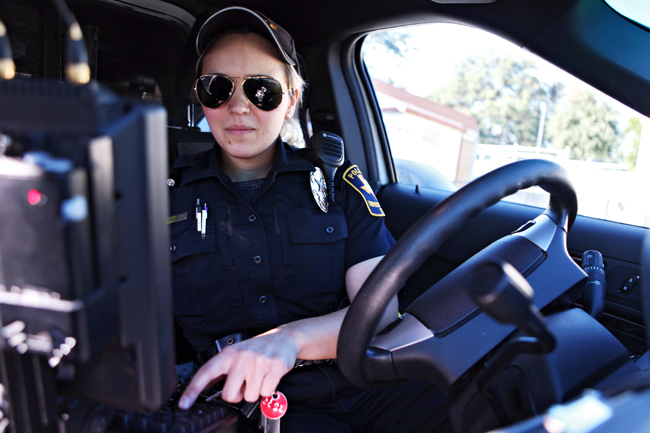 Around 4:30 p.m., UTPD officer Amberly Weyand gets her first call of the evening while on patrol. The radio attached to her uniform begins to crackle, indicating she’s receiving a call from dispatch.

The description and location of the call appear on a computer screen in Weyand’s vehicle. It’s a welfare concern call involving a homeless man whom witnesses have said appears publicly intoxicated. Weyand drives her SUV patrol vehicle toward 21st Street to assess the situation.

Calls like this one are common on the evening shift, which involves dealing with a variety of different situations, Weyand said.

“You get different types of calls. So day shift, they mostly deal with collisions and thefts, whereas evening shift, we get a nice mixture of both day shift-type calls and night shift-type calls,” Weyand said. “And then night shift is strictly, you know, smell of marijuana calls, alcohol related, DWI — that’s basically all they’re doing.”

Weyand, who graduated from the University in 2012, is one of UTPD’s nine evening patrol officers. These officers work five days a week from 3-11 p.m., responding to everything from door alarms — the most common evening calls — to marijuana possessions and bike thefts on campus.

The most exciting part of the job, according to Weyand, is putting the pieces together to catch suspects.

“We get those calls where we’re chasing someone, or we’re actively looking for a suspect. And then it’s like a puzzle,” Weyand said. “Once you get that person detained, you’re like, ‘Okay, what do we have here?’ So we have our laws and the penal code and our arrest authorities. It’s about figuring out how those puzzle pieces fit together.”

Weyand said much of the evening shift involves dealing with homeless individuals and criminal trespass warnings.

“We do deal with a lot of the homeless population, especially in the Union building. They get into fights or are drunk, and we issue them criminal trespass warnings,” Weyand said. “We only have to arrest them if they have a protective order or if they’re being violent. Usually we just try to help them out.”

Each patrol officer’s evening starts off at the University Police Building, where officers attend a briefing before shift starts. They then get into assigned patrol cars and make rounds around their respective sections. These sections, or districts, are numbered one through five, and officers are responsible for crimes that occur in their respective districts.

“My district is four, which covers the Jester area and around the Student Activity Center to the PCL,” Weyand said. “It’s condensed, but I get a lot of activity from Jester.”

Weyand said game days are the busiest days for evening patrol because of alcohol-related calls.

“Game day, working on the streets, it’s pretty hectic because all of the roads are blocked off, so it’s hard to get around,” Weyand said. “Your basis for what’s public intoxication varies on game days because everyone’s drinking. As long as they have someone sober there to take care of them and take them home, that’s the route that we typically take.”

One of the most challenging parts of the job, according to Weyand, is trying to track down suspects when there’s not much evidence to go on.

“I think the best calls are when … we have a crime that just occurred, and we’re able to canvas the area and search for that subject — that’s exciting,” Weyand said. “But the majority of our calls are thefts that occurred [earlier] that morning, or whatever, and we don’t have the suspect information, so that makes it tough for us.”

Despite these challenges, Weyand said she enjoys the sense of service and responsibility that comes with helping people.

“It’s really about showing some empathy, [and trying] to put yourself in their shoes,” Weyand said. “Not everybody needs to go to jail. We just try to give them the resources that they deserve.”