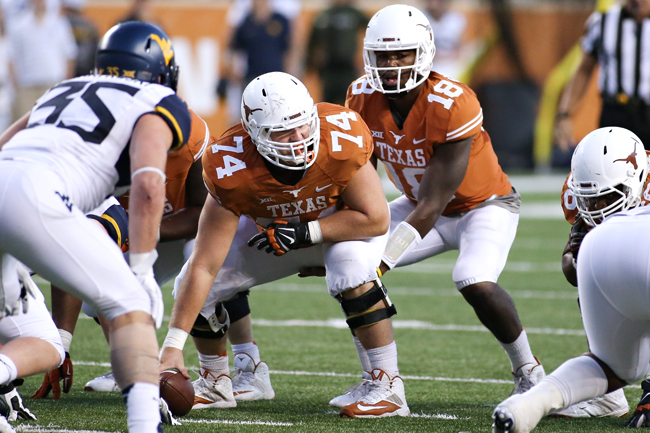 Texas’ offensive line doesn’t do anything on a small scale.

Against West Virginia on Saturday, junior center Taylor Doyle and company weren’t just trying to open small gaps for their running backs. Instead, they created large holes and allowed the running backs to rack up 227 rushing yards, including 101 yards for three touchdowns by junior running back Johnathan Gray alone. While the running backs claim partial success for this production, head coach Charlie Strong said the offensive line deserves credit, too.

“They realize how focused and tight they have to be for everyone to believe in them,” Strong said. “Now, the running backs are trusting them. You probably could’ve driven a car through those gaps.”

Gaps warranting such hyperbolic praise are one example of the offensive line’s tendency to go big or go home. But each of the team’s tendencies seems to loom large, and breakfast is no exception. The offensive line gathers at 7 a.m. Monday mornings to watch film of the upcoming opponent over breakfast. Feeding an entire offensive line, Doyle said, is no small feat.

“In the weight room, they give out these [granola] bars, and that’s pretty much the best option,” Doyle said. “We’ll take down seven or eight a piece.”

The Monday film sessions are one way the offensive line bonds, but their overarching mentality and common background invite similarities as well. With suspensions, injuries and personnel shifts, the offensive line started nearly from scratch at the season’s start, but, now, it has grown together.

“No one foresaw where this season was going to go, what the offensive line [would look like],” Doyle said. “There have been plenty of surprises, but I think everyone’s risen to the challenge and accepted where they stand on the team.”

Doyle’s teammates agree. Although players such as senior wide receiver John Harris have had breakout seasons, the passing game isn’t fully formed, as sophomore quarterback Tyrone Swoopes climbs the learning curve as well. Harris said the offensive line stepped up when he played his worst game of the season against West Virginia.

“We knew they weren’t that great of a run-stopping defense but [the offensive line] made [West Virginia] pay for it,” Harris said. “Our offensive line made them pay big time. They stepped up big when the pass game wasn’t there for us.”

Swoopes, too, appreciates the running opportunities the line has given him, as he’s seen the running backs’ performances reflect the growth of the unit.

“They came a long way from the beginning of the season to now,” Swoopes said. “They work hard during practice and games and don’t complain, so I feel like they’re great.”