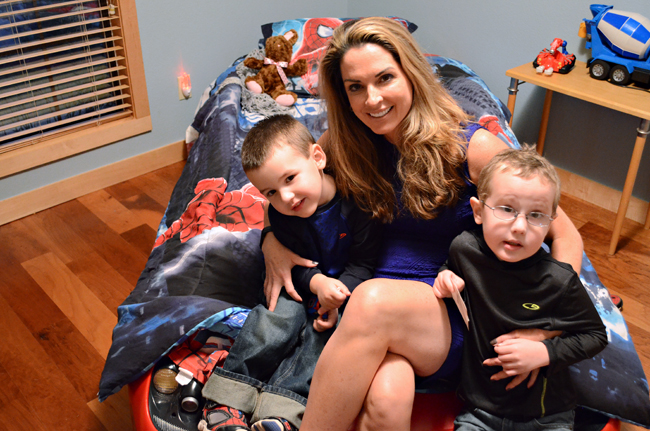 The first time anyone ever told UT alumna Jennifer Walden that she would be a surgeon, she was in junior high. Her teacher recognized her ability to quickly dissect a pig while the rest of the class struggled squeamishly.

“That was the first little nugget implanted in my head,” Walden said. “Every time I ever worked with dissections or the human body, I enjoyed that a lot. It was a natural fit for me.”

Walden did as her teacher predicted when she earned a degree from the University of Texas Medical Branch-Galveston and became a plastic surgeon. As an undergrad at UT, Walden learned to balance her studies, her sorority, a pre-med honor society and club sports. Now, she owns a private practice — Walden Cosmetic Surgery Center — with a fully accredited operating room located at the Westlake Medical Center.

“The work I do is conservative but dramatic,” Walden said. “I operate on people who are well and healthy but want to do something that will make them feel better about themselves. The best plastic surgery is what you don’t know has been done.”

Walden realized her affinity for plastic surgery when she rotated through different surgical specialties in medical school.

“When you go through that rotation, you just know that’s what you want to do,” Walden said. “It’s almost like meeting the love of your life.”

Walden said she loves her ability to make an enormous change in patients’ lives through surgery.

After her fellowship at the Manhattan Eye, Ear & Throat Hospital, Walden worked in New York for seven-and-a-half years. In 2010, Walden chose single motherhood and used in vitro fertilization to give birth to her twin sons. A year later, she uprooted her practice and moved it to Austin to be near her parents and siblings.

“I think one of the things about being a female surgeon is that you end up delaying your child bearing,” Walden said. “Moving back was one of the hardest and most rewarding times of my life. I wouldn’t change the timeline of events at all because, at the end of the day, I own my own business and I’m the captain of my own ship.”

As a female in the male-dominated field of surgery, Walden said she has never been intimidated.

“I enjoy having male colleagues,” Walden said. “It takes the right mind-set of knowing you’re going to be scrutinized more than your male counterpart. Men and women are different, and, if you embrace that and work your tail off, there shouldn’t be a problem.”

Aside from being a full-time mother and surgeon, Walden is a co-author of “Aesthetic Plastic Surgery” and a philanthropist involved with many organizations, such as Austin Smiles and the Junior League of Austin’s Food In Tummies program.

“I would love, as they get older, to take my boys along on mission trips so they can see how privileged they are to live in our world,” Walden said. “I also like giving back to my community here and giving back to children because they’re helpless.”

Walden said owning her own practice is a dream come true. She credits her success to her mentors, the support of her family and hard work.

“Thinking back, I thought I would’ve been much more normal,” Walden said. “But I exceeded expectations. When you do make your major life decisions, make them not on money and not on fame. Base them off of what’s best for your family or well-being. I feel like it will take you in the right direction.”