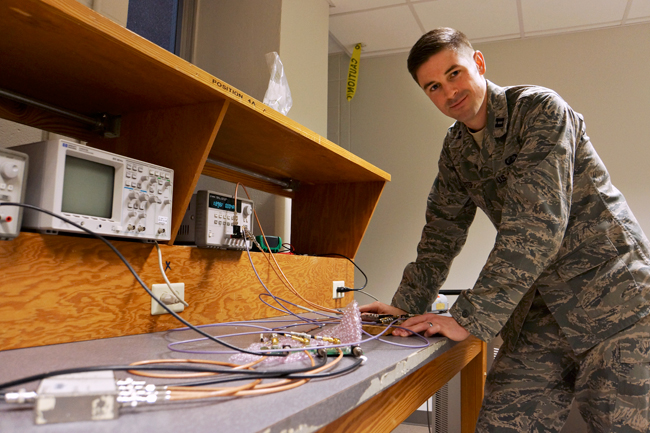 UT researchers at the Cockrell School of Engineering recently developed a smaller and more efficient radio wave circulator, which they say could significantly improve telecommunication.

According to Nicholas Estep, electrical and computer engineering graduate student and lead researcher for the project, this new device can transmit and receive signals on the same frequency band at the same time. The research, which was published in Nature Physics in November, found that the device is practical and inexpensive. Estep said the device could improve the efficiency of wireless communication.

“The biggest advantage of this device is that it is comprised of passive components that are conductive to CMOS fabrication techniques, instead of bulky, expensive magnetic materials,” Estep said. “We can potentially incorporate our design in a larger, more complex integrated circuit at minimal cost.”

Estep said the project — funded by the Defense Threat Reduction Agency and the Air Force Office of Scientific Research — started with a magnetic-free circulator theory from Dimitrios Sounas, a postdoctoral fellow in the engineering school who worked on the research. According to Estep, it took a year for the team to build a prototype of the device.

“With this technology, we can incorporate tunable nonreciprocal components in mobile platforms,” Estep said.

While magnetic-based circulators have been capable of transmitting and receiving signals on the same frequency, such technology can not efficiently be incorporated in wireless devices, according to Estep. Estep said that, because his circulator does not use magnets, it could be used in cellphones and other devices.

“The thing about this device is that it is magnetic-free, and it is also scalable and capable of circuit integration, which means it can potentially be placed in wireless devices,” Estep said.

Estep said this device is the first experimental device of its kind, and technology companies have shown interest in it.

“We have introduced a completely different circulator,” Estep said. “It is a big step from what we have been using in the past 60 years.”

Andrea Alu, electrical and computer engineering associate professor, said in a statement that the researchers are also bringing this prototype to other areas of science and technology.