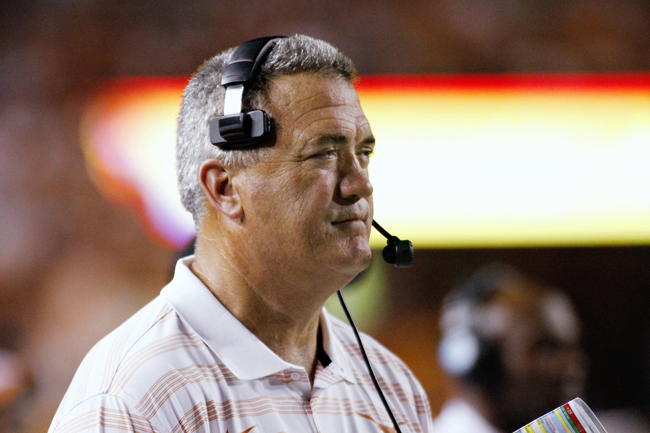 For Joe Wickline, offensive coordinator and offensive line coach, this weekend’s trip to Stillwater, Oklahoma, will be somewhat of an awkward homecoming.

On one hand, he will be returning to the house that built him.

At Oklahoma State, in the friendly atmosphere of Boone Pickens Stadium, Wickline led an offensive line that consistently ranked among the best in the country. He also coached the likes of Russell Okung and Corey Hilliard, and developed a résumé that eventually persuaded Texas head coach Charlie Strong to hire him as his offensive coordinator.

On the other hand, Wickline will be returning to a university that is currently suing him for nearly $600,000.

When Wickline left Oklahoma State, his contract stated he would owe the program the remaining balance of his contract unless he was named “offensive coordinator with play-calling duties” or took an NFL job.

Initially, that’s how his gig in Austin was presented: Strong hired him as the offensive coordinator, and he was to share play-calling duties with Shawn Watson, assistant head coach for offense and quarterbacks coach.

But, according to Oklahoma State administrators, Watson has been calling the plays, and Wickline hasn’t been involved at all, so he must pay the school the remaining $593,478 of his salary.

The mini-drama has added fuel to the fire ahead of this weekend’s must-win game for the Longhorns, but the Texas coaching staff insists it won’t be a distraction.

“It’s not going to be brought up, and it’s not a concern,” Strong said. “Their concern is go play Oklahoma State because the lawsuit has nothing to do with how we’re going to play and where our focus is going to be.”

All legal matters aside, Wickline’s wealth of experience working alongside Cowboys head coach Mike Gundy and the rest of the Oklahoma State staff should give Texas the inside edge Saturday.

Defensive coordinator Vance Bedford spent time on Gundy’s staff as well, but that was back in 2005 and 2006. Wickline’s recent nine-year tenure with the Pokes will be particularly advantageous.

“It’ll be helpful when we start talking personnel that he knows the guys,” Strong said.

Several of Oklahoma State’s players from a year ago, when Wickline was still there, are key contributors this year, so having him on staff should help the Longhorns prepare on both sides of the ball.

“I think he’ll be a huge asset,” senior receiver John Harris said. “[Wickline] knows the guys that are on the defensive side pretty well. We’re going to rely on him a lot, take his input on what we need to do and how we need to go out and get this win.

Perhaps Wickline’s prior experience with the Cowboys will prove to be the added advantage the Longhorns need to get past Oklahoma State and gain bowl eligibility this weekend. Or maybe his lawsuit with the school will end up being a distraction Texas can’t overcome, giving the Pokes their sixth win of the season and a post-season birth of their own.

Either way, one team will leave Saturday’s contest having realized its bowl aspirations.