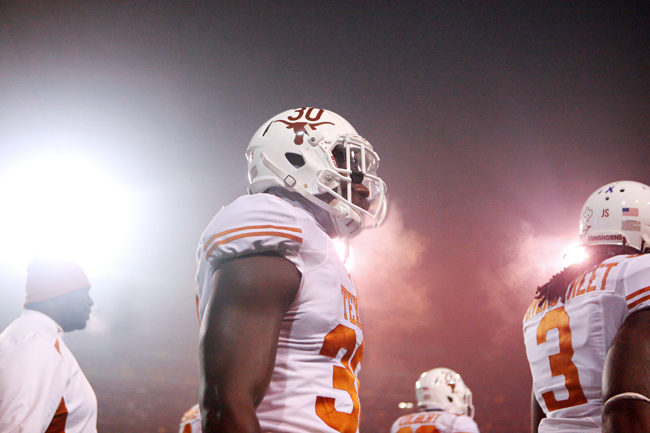 Coming from a school where class has a good probability of getting canceled when temperatures require more than a sweatshirt, this weekend’s trip to Oklahoma State could provide a shock to the system for the Longhorns.

Saturday, the forecast in Stillwater, Oklahoma, calls for a high of 40 degrees, a low of 27 degrees and a chance of a “wintry mix” throughout the day. With the kickoff coming at 6:30 p.m., well after sunset, temperatures may drop below freezing before the start of the game.

For a team filled mostly with native Texans, the thought of playing football in such miserable conditions might be a little daunting.

“I have not ever played in the snow,” sophomore quarterback Tyrone Swoopes said. “But I think I’ve just got to focus a little bit more and not worry about the cold.”

It’s not as if the Cowboys are used to playing in the frigid conditions either, but they certainly have more experience dealing with it in Oklahoma, where the freeze is pretty common.

For Texas, the closest thing it’s seen to this kind of weather was last year’s de facto Big 12 championship game in Waco, where the Longhorns lost to Baylor, 30-10, in temperatures that hovered around 25 degrees.

While there wasn’t any snow on that December afternoon, a wicked breeze added to the unusually cold temperatures. The cold weather appeared to have a major impact on former Texas quarterback Case McCoy, who completed just 12 of his 34 pass attempts for a mere 54 yards and threw two interceptions.

Head coach Charlie Strong and the Longhorn coaching staff are well aware of the challenges this weekend’s conditions may pose, but they’re insistent upon preparing their team as if it were any other Saturday.

“We’re going to go play the game, so there’s nothing much we can do,” Strong said. “It may be cold, but they’ll be OK. It’s only three- and-a-half hours out there.”

Considering its success over the past couple of weeks and the challenge that comes with throwing and catching a frozen football, Texas may rely more heavily on the run than usual.

The Longhorn offensive line is finally finding its rhythm as the season winds down, opening holes for junior running back Johnathan Gray and senior running back Malcolm Brown, who, as we saw against Baylor, doesn’t seem to be as bothered by bad weather. Brown had 131 yards on the ground and a receiving touchdown in last year’s Ice Bowl.