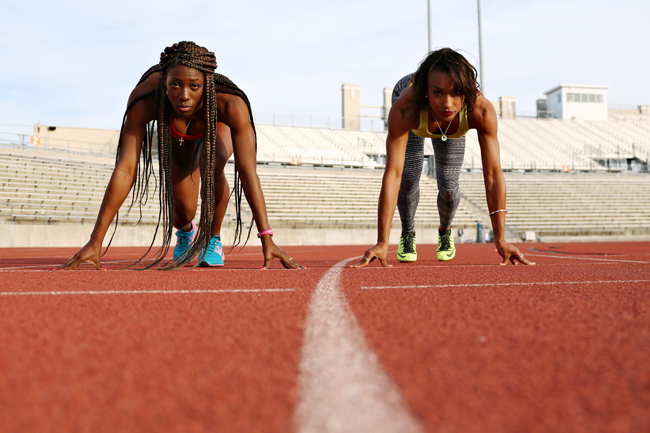 For Kendra Chambers, life is a constant workout. A former member of the UT track team, Chambers now works as a production assistant for the Longhorn Network, leads her own personal fitness group four days a week and drives to and from San Antonio almost every day to train for the Olympics.

Passionate about being the best that she can be in every aspect of her life, Chambers’ drive to compete in the Olympics comes not from the quest for fame — but from an internal want for accomplishment.

“When you want to do something the best that you can physically, there’s certain steps you have to take,” Chambers said. “For track and field, it comes with being on the world-class stage. I know if I’m in that setting, it will help push to max out my full potential.”

Chambers makes the daily drive to San Antonio in order to be trained by coach Rose Monday, the middle distance chair for USA Track & Field.

“[He] remembered that I was really into Longhorn Network, and that’s ultimately what I wanted to do after I graduated,” Chambers said. “A position opened up, and he was like, ‘Would you like to come in and interview for it?’ and I was like, ‘Of course,’ and it kind of just went from there.”

It didn’t take long before Chambers realized she could use her own skills to help out fellow Longhorns. Chambers started her own training group, KC’s Fitness Crew, in order to access a larger amount of students and friends asking for her help.

“I created [KC’s Fitness Crew] after spending a month or two with friends [who] wanted me to help them work out,” Chambers said. “It evolved into other people wanting to come work out, and it just kind of snowballed into this.”

The fitness program has served as the perfect trial run for a future business venture, according to Chambers. When she is done competing, she plans to get her personal training certificate and pursue training on a more professional level.

Courtney Coleman, business and marketing senior and Chambers’ boyfriend, often attends or watches the fitness sessions. Coleman said Chambers’ motivation has made a positive impact on his life.

“Her motivational attitude was definitely one of the main things that attracted me to her,” Coleman said. “It helps me be the best that I can, and we help support each other in any way we can.”

Stacey-Ann Smith, former Texas athlete and one of Chambers’ best friends, said Chambers’ attitude helped her pursue her goals, too. Smith ran track at UT and lived with Chambers while they were students. Smith also spends her time pursuing a goal of competing in the Olympics while running her own physical boot camp.