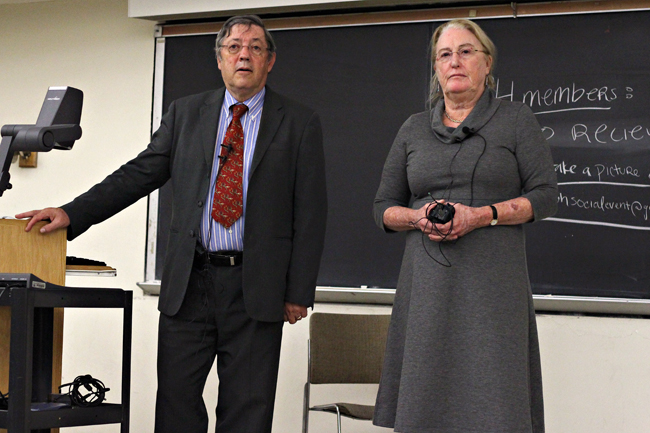 Joseph McCormick and Susan Fisher-Hoch, husband-and-wife disease detectives from the UT-Brownsville School of Public Health, lectured Thursday at Welch Hall to dissect the facts of the West African Ebola epidemic and its misconceptions.

“Recently, many people who are on television have said all sort of things about Ebola — some correct and some incorrect,” McCormick said. “One of the most blatantly incorrect was that we don’t know much about Ebola. I have to tell you we know a lot about Ebola.”

According to Fisher-Hoch, the U.S. wasn’t interested in Ebola until the virus came to the country. She said if aid isn’t given to West Africa, the Ebola virus will continue to spread.

“It doesn’t matter how many places there are in Africa [with Ebola], but it will not bring attention here until, unfortunately … a ‘white face’ gets it,” Fisher-Hoch said. “If we don’t control Ebola in West Africa, it will continue to come to the United States.”

Fisher-Hoch reminded students that Ebola will not mutate if a vaccine is made.

“There is no antigenic pressure to make it mutate,” Fisher-Hoch said. “This is not like HIV. It’s not adaptive. … We don’t really have to worry too much about the vaccine becoming ineffective.”

“The virus does not kill directly,” Fisher-Hoch said. “The virus’ effect on the immune system kills the host.”

Vaccines such as ZMapp, Brincidofovir and Hyperimmune plasma have been effective for Ebola suppression, according Fisher-Hoch.

McCormick said one can only transmit Ebola through the exchange of body fluids, such as blood, vomit and diarrhea — but not urine, perspiration or saliva. He said the virus will spread but will not be as disruptive in other countries.

“With thousands of cases … it’s totally inevitable that other countries are going to see some cases,” McCormick said. “I want to emphasize we are not going to have an outbreak from Ebola.”

“Ebola was scary for a few weeks because we thought it was going to get to us,” Ramirez said. “[We need to] pay more attention to undeveloped countries that have these outbreaks … because, even though they are not affecting us, that doesn’t mean it’s not a problem.”