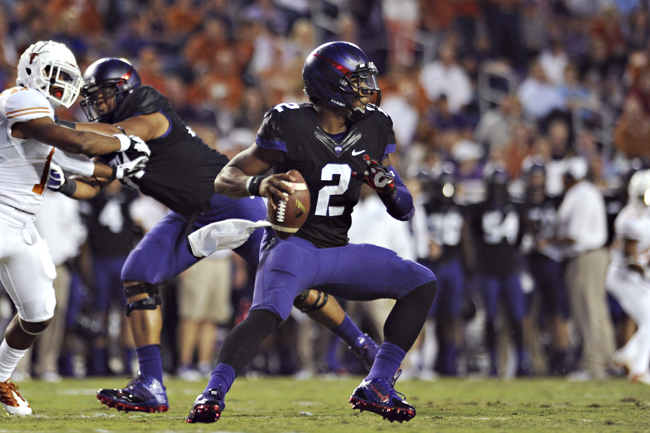 If there’s one safe bet to be made in the midst of college football’s unpredictable regular season conclusion, it should be made on the Oregon Ducks. The Ducks’ last two regular season contests come against Colorado and Oregon State — two teams that Oregon should brush off with ease. An equally safe bet can be made on Mariota’s performance against the lesser opponents. It would be shocking if the junior does not tear apart both defenses and add more accolades to his already impressive Heisman résumé. Mariota and the Ducks look like serious championship contenders right now, and, at least for the near future, Mariota’s Heisman lead appears safe.

To say that this is an important week for Prescott’s Heisman hopes would be a major understatement. On Saturday, the breakthrough player of the year will lead his first-ranked Bulldogs into Tuscaloosa for the game of the week against Alabama. And although the Tide have been shaky this year, they’ve been absolutely dominant at home. Beating them there takes mistake-free play from a quarterback, and then some. Prescott has struggled with consistency in recent weeks, but he turned it around last Saturday against Tennessee-Martin. Prescott’s greatest responsibility will be to take care of the ball, and, if he can’t do that, the Bulldogs are certain to lose, eliminating any chance he has of winning college football’s most prestigious award.

It’s easy to take Gordon’s performance for granted because he’s been so consistent, and his impressive numbers have become the expectation. But what Gordon has accomplished this season has been spectacular. Gordon is at, or near, the top of every rushing statistic, including the most important one: total rushing yard. It takes just one play to realize why Gordon is the Wisconsin offense’s most important piece. There’s no reason to believe that he won’t finish strong in the Badgers’ last two regular season games and put a stamp on one of the greatest running back campaigns in recent history.

Boykin has delivered when the pressure has been greatest. Last week, he did it again in what was supposed to be a close contest against Kansas State, in which Boykin easily led the Horned Frogs to a blowout win. Without Boykin, TCU probably wouldn’t even be relevant, let alone in the College Football Playoff conversation. The former receiver has done everything and more to make up for TCU’s poor defense, single-handedly dragging his team to a 9-1 record and a chance to play for a national championship.

Aside from a dropped pass late in the fourth quarter that could have made things easier for the Tide last week, Cooper turned in another impressive performance against a solid LSU defense. Having such a major impact is nothing new to Cooper, who is having as good a season as an Alabama receiver ever has. He’s second in the nation in receiving yards and near the top in every other category, but, more importantly, he’s the most important element of Alabama’s offensive attack. As the Tide find themselves fighting for a spot in the final four, nobody will be as vital in getting them there as Cooper.