In legislative session, gun rights should be treated as public safety issue 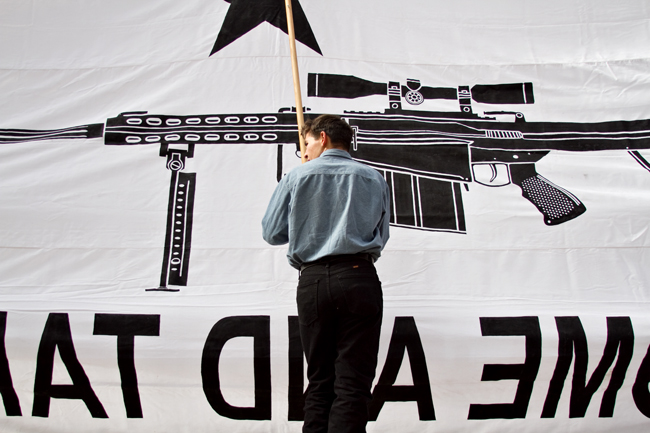 Governor-elect Greg Abbott has made no secret of his support of gun rights in Texas. In December 2013, Abbott created a “We the People” petition, proposing legislation that would allow Concealed Handgun Licensing (CHL) holders to, at a minimum, openly carry holstered weapons, as well as allow concealed weapons on college campuses. He also made the protection and expansion of gun rights a cornerstone of his gubernatorial campaign, stating on his campaign website that he is currently preparing to challenge federal legislation that would restrict Americans’ ability to own and carry weapons. Though a controversial topic, to Abbott, the issue of gun rights was settled in 1791 with the penning of the Bill of Rights. But that is an oversimplification if I’ve ever heard one, and not coincidentally, the crux of the battle for gun ownership in America.

If you’re not worried about Abbott expanding laws regarding guns in Texas, you should be. While it is not within his constitutional powers as governor to expand the Second Amendment, which was part of his platform, nor to contest federal legislation in Congress, he can support bills that would make it easier for people to obtain and carry weapons. Additionally, his success in fighting restrictions of the Second Amendment suggests he may succeed in passing legislation to the same effect. In 2008, Abbott successfully argued for an individual’s right to bear arms before the Supreme Court in District of Columbia v. Heller, a victory that struck down a handgun ban in Washington, D.C. But if you are anti-gun, your problem isn’t men like Abbott or the gun lobby, two things that most people blame for ongoing contention over gun rights. It’s that the Constitution protects such rights.

The Constitution states the American people have the right to keep and bear arms, plain and simple. For many people, including Governor-elect Abbott and the most powerful lobby in America, the story of gun rights begins and ends with that statement. But it doesn’t for me. Although the Constitution is without a doubt one of the most stunning documents ever to have been written from a philosophical and historical perspective, it has left significant leeway for bitter debate throughout American history, from equal freedoms for all in the abolitionist movement to the fight over the Second Amendment today. Luckily, the Constitution allows for corrections to be made in the case that lawmakers vote to amend it, as Congress did when the wrongs of slavery and civil inequality were righted by the Thirteenth, Fourteenth and Fifteenth Amendments. Therefore, saying that gun rights should be allowed on the singular basis that our founders wrote it into the Constitution is overly simplistic. The founders didn’t believe in their irrefutable correctness. Why should we?

The Second Amendment is out-of-date. It was written soon after the start of the American Revolution when the memory was still fresh of quartered British soldiers confiscating any weapons that could be used against them in colonial homes. But more importantly, categorical gun rights are irresponsible and dangerous. Scholarship is bursting with empirical studies proving how harmful weapons in the home are. Besides, some people really are crazy. We cannot trust all gun owners not to take advantage of their constitutional right to own a gun, and then use it to harm others. If you don’t believe me, ask the families of any of the 467,321 people the Office of Justice found to be victims of crimes committed with a gun in 2011. Or better yet, look at your own campus with a discerning eye: The pockmarked stonework around the South Mall is a daily reminder of the bullets that rained down on students in 1966, and this campus has yet to forget the 2010 shooter in the Perry-Castañeda Library. First and foremost, gun rights are a public safety issue. The right of Americans to be safe from violent crime is greater than the right of practically anyone to own and carry a gun. If it’s not, it should be.

But the second half of the Amendment is what really complicates things: “the right of the people to keep and bear arms shall not be infringed upon.” That is why, as attorney general, Abbott was able to argue against laws that restricted the right to bear arms. And that is why he will be able to propose legislation in Texas that would open the acquisition of guns and the ability to carry them to even more people. But just because the Constitution guarantees a right, doesn’t mean it isn’t lawful to limit a right to protect the whole as opposed to serving the wishes of the individual. For example, the right to freedom of speech is limited when it is in conflict with the good of others, such as in national security incidents and libelous or slanderous verbal assaults. So what is stopping us?

Though the Constitution’s direct meaning is contested, the path for increased public safety is clear. It is irresponsible to strip away current restrictions placed on gun holders, as Greg Abbott wishes to do. Though we live in a red state, where support for gun rights is popular, it would be a disservice to Texas residents for our new legislature not to take the needs of the whole into account in the upcoming legislative season. Like laws restricting advertisements for tobacco and the drinking age, the fight over gun rights is a public safety issue and should be treated as such.

Smith is a history junior from Austin.