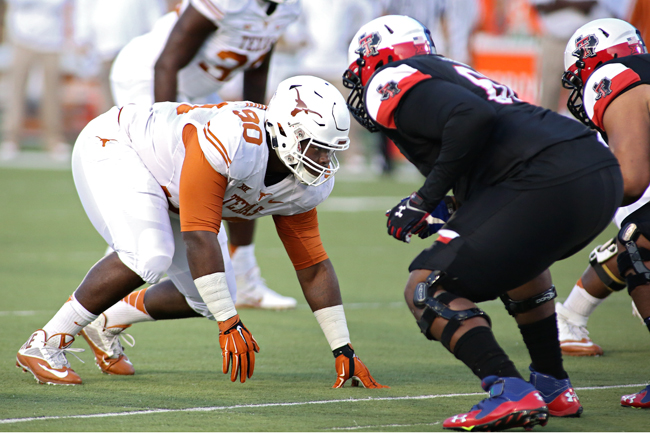 The above examples blow sophomore defensive tackle Hassan Ridgeway, who leads Texas with five, out of the water. Despite the lack of individual production, the Longhorns are averaging three sacks per game — their highest average over the first 10 games of a season since 2008.

This is largely a result of consistency and depth along the defensive front, as seven different players have dropped the quarterback at least twice.

Despite none of the players recording elite numbers, the Longhorns have proven they have an abundance of talent leading the way on the defensive side of the ball this season.

Senior linebacker Jordan Hicks is finally healthy and has acted as the quarterback of the defense.

“Just think about the term linebacker,” said Vance Bedford, defensive coordinator and secondary coach. “It means he is half of a lineman and half of a defensive back. He’s in the middle of our defense and controls our defense.”

With 110 tackles on the year, Hicks is tied for the most by a player in a power-five conference. He has also picked off two passes and has recorded 1.5 sacks.

But Hicks does not lead strictly by example. He is extremely vocal, which is a very important characteristic of a linebacker.

“You need a guy who can do it by example but also a person who’s vocal,” Bedford said. “Jordan Hicks has been that guy for us this year.”

Despite receiving many accolades, such as being named a semifinalist for the Bednarik Award, Hicks is quick to tell you his success is not all his own doing.

“I haven’t had a perfect game out there, never will, but I feel like I’m playing my best ball, and, obviously, I have a lot of confidence right now and a lot of credit to the guys in front of me,” Hicks said. “Having Hassan Ridgeway and Malcom Brown ahead of me is kind of nice.”

Brown, a junior defensive tackle, has arguably been Texas’ best player this year, and the coaches have taken notice of his performance.

Brown is tied for second on the team with 4.5 sacks, but his impact on the field goes beyond his personal stats. Brown often draws double teams from the opposing offensive linemen, which helps explain why his numbers are not as dominant as his talent might suggest.

He also has the potential to become a top pick in the 2015 NFL Draft and have a long, successful NFL career.

“If you ask me right now, I think the young man is a first round pick,” Bedford says.

Other players, such as senior defensive end Cedric Reed, have also made their presence felt on the unit. Reed is coming off the best game of his career, during which he tripled his sack total for the season.

Reed and the defense’s ability to pressure the quarterback could be on display again in Stillwater, Oklahoma, this weekend against a Cowboy offensive line that allows three sacks a game to conference foes, most in the conference. That’s something worth remembering as, since sacks became an official stat, the Longhorns have not lost to Oklahoma State when they win the sack battle.