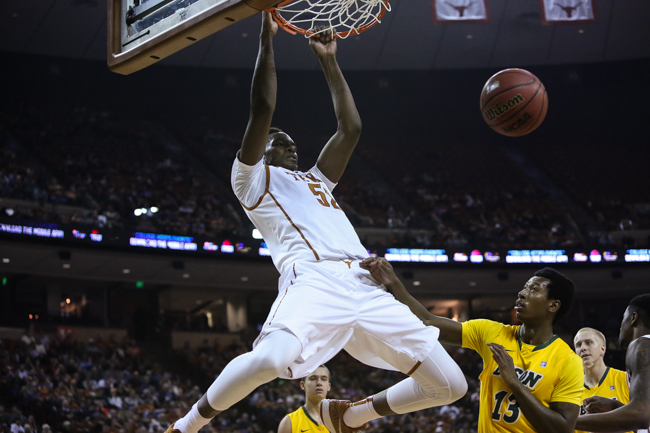 The crowd at the Frank Erwin Center erupted with cheers as freshman center Myles Turner entered the game for the first time early in the first half.

But the cheers only got louder as the game went on, as Turner scored 15 points and grabbed six rebounds to lead the Longhorns to a 85-50 victory over North Dakota State in the season opener.

Turner connected on his first three shot attempts, all jumpers, and finished 6-of-8 shooting. His third jumper, a Dirk Nowitzki-esque fade away off his back foot, forced North Dakota State to call a timeout, eliciting a roar of cheers from the Texas fans.

“It felt great coming out there and starting that way,” Turner said. “The crowd was in the game at that point, and it gave us a lot of momentum.”

Sophomore point guard Isaiah Taylor led Texas with 18 points and seven rebounds in the game while adding two assists and two steals. After talking about shooting the ball more in the offseason, Taylor connected on several midrange jump shots and went 2-of-3 from beyond the three-point line.

Senior forward Johnathan Holmes  also impressed for Texas in his first game starting at small forward, scoring 15 points on 5-of-6 shooting while snaring five rebounds. Holmes connected on each of his first two three-pointers to put Texas up 8-0 early.

The Longhorns started the game on a 20-4 run and led by double-digits throughout the game. Six different players contributed at least eight points for Texas, while five players grabbed at least five rebounds.

“Having fresh legs is always good, especially when we play teams that might not be as deep as we are,” said junior guard Demarcus Holland. “We practice hard every day and everybody competes every day, and we know we have guys who can produce like the starters.

Texas looked strong on defense, too, limiting the Bison to just 27.4 percent shooting from the field. The Longhorns also outrebounded North Dakota State by a considerable margin, snagging 51 boards to the Bison’s 32.

But while Texas was pleased to kick off the season with a victory, it realizes the need for continuous improvement as its level of competition becomes tougher this season.

“It felt great, but we know we got to keep it going from here,” Holland said. “We had a fun time, and we’re looking forward to playing Sunday.”