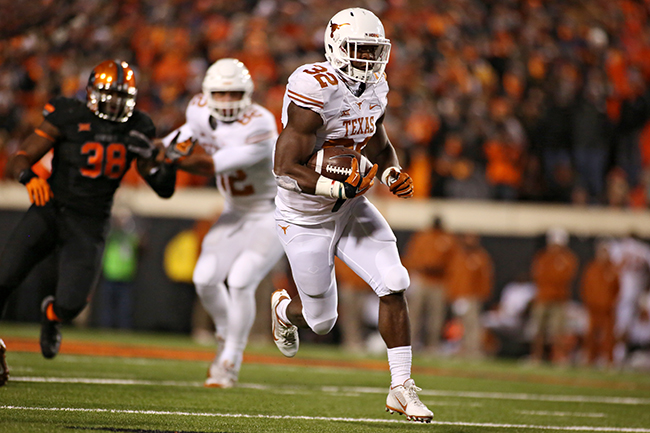 STILLWATER, Okla. — On a night when temperatures dipped below 40 degrees, sophomore quarterback Tyrone Swoopes put the game on ice with a 45-yard touchdown pass late in the fourth quarter, sealing a 28-7 victory for the Longhorns.

The Texas defense stood tall all evening, and Swoopes and co. did more than enough to give the Longhorns their sixth win of the year. That was the magic number for head coach Charlie Strong, who is now bowl eligible in his first season at the helm.

“In the locker room, they’re just so happy,” Strong said. “I’m just so happy for them to get to a bowl game because, a few weeks ago, nobody thought we would be here; everybody just wrote us off.”

The offense was solid, but the Texas defense led the team to its third consecutive victory Saturday, holding Oklahoma State off the scoreboard through the first three quarters of the game.

The majority of the defense’s success came as a result of its stellar pass rush, which recorded seven sacks and spent a good part of the night in the Cowboys’ backfield, making it tough for quarterback Daxx Garman to get anything going.

No one player was particularly dominant for the defense, but the entire unit played well, limiting mistakes and coming up with big plays all game long. In all, defensive coordinator Vance Bedford’s bunch forced two turnovers and limited Oklahoma State to 192 yards of total offense in the contest.

“There was so much individual effort, but it was a team effort,” Strong said. “To just watch how hard they played, and, defensively, they had a shutout going for a long time.”

Offensively, Texas put together its most complete performance of the season, racking up a total of 430 yards.

After a few bad weeks, Swoopes picked up right where he left off against Iowa State, completing 73 percent of his passes for 305 yards and two touchdowns. The improved offensive line play gave the sophomore quarterback plenty of time to work through his reads and throw the deep ball with success.

“These last couple weeks I didn’t play too well, so to come in and have a game like this is a real confidence booster,” Swoopes said.

Senior receiver John Harris continued to pad his stats in what’s been an incredible season, snagging nine balls for 117 yards and a touchdown. That gives him 976 yards and seven scores on the year, as he looks to become the first Longhorn to cross the 1,000-yard plateau since Jordan Shipley did it in 2009.

“It’s a blessing to be in this position,” Harris said. “Not very many receivers here have done it. It’s been a challenge, but I can’t wait to get to 1,000 yards and be a part of that club.”

The Longhorns now have a week off before taking on TCU in Austin on Thanksgiving. Kickoff is set for 6:30 p.m. on Fox Sports 1.