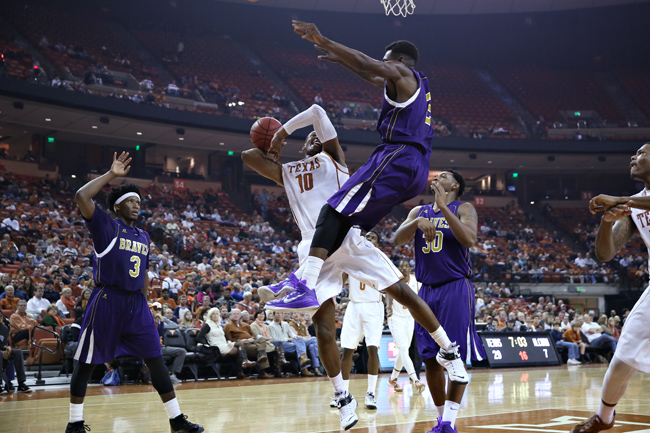 Alcorn State was no match for Texas on Sunday, as the No. 10 Longhorns ran away with an 85-53 victory in Austin to cap off an impressive opening weekend.

It got ugly early on as Alcorn State (0-2) couldn’t score. With 6-foot-9 forward Connor Lammert, 6-foot-9 center Cameron Ridley and 6-foot-8 forward Jonathan Holmes patrolling the rim from the get-go, Texas held Alcorn State (0-2) scoreless for the first 6:26, opening up a 15-0 lead in the process.

“We came out focused,” Holmes said. “We knew what they wanted to do on offense, and we helped each other out. Then we executed on O.”

Texas continued the onslaught throughout, led by sophomore point guard Isaiah Taylor’s 12 points and the production of at least 2 points from 11 other Longhorns, confirming what head coach Rick Barnes has been boasting about all along: This is a deep team.

What stood out most to Barnes, however, was the fluidity of the offense.

Despite Texas’ large lead, it started the second half sluggish, drawing the ire of its head coach.

“I didn’t like how we started the second half,” Barnes said. “We were sloppy. Those guys came out and sat for awhile. We aren’t going to waste our minutes.”

Although the Myles Turner Show debuted quickly in the season opener, it took the freshman forward a little longer to get going in his second game. He picked up two early fouls, limiting him to just three first-half minutes. But in the second half, he brought the crowd to its feet. He ended with 10 points, seven rebounds and, most importantly, six blocks.

“He was frustrated he had to sit in the first half,” Barnes said. “He’ll get better each game.”

The steamrolling of Alcorn State was the follow-up Texas wanted after looking impressive in the opener against North Dakota State on Friday night. Behind Taylor’s 18 and Holmes’ and Turner’s 15, Texas toppled the Bison, 85-50, in front of more than 11,000 fans — the largest opening-night crowd Barnes can recall in his 17 years.

“If I had to pick an MVP, it’s the fans,” Barnes said Friday night.

Coming into this season, one of the biggest question marks for Barnes’ team was whether the team could shoot. All preseason, they maintained that they could and that they looked forward to proving the doubters wrong.

They’ve done just that in their first two games, shooting 40 percent from downtown in the opening weekend, with eight different players knocking down at least one 3-pointer.

“A lot of teams don’t think we can shoot,” Taylor said. “But a lot of us can shoot. We got shooters out there, which makes it even harder to defend us.”

Texas’ next test will be a lot tougher as it travels to Madison Square Garden to take on Iowa and either No. 23 Syracuse or California.