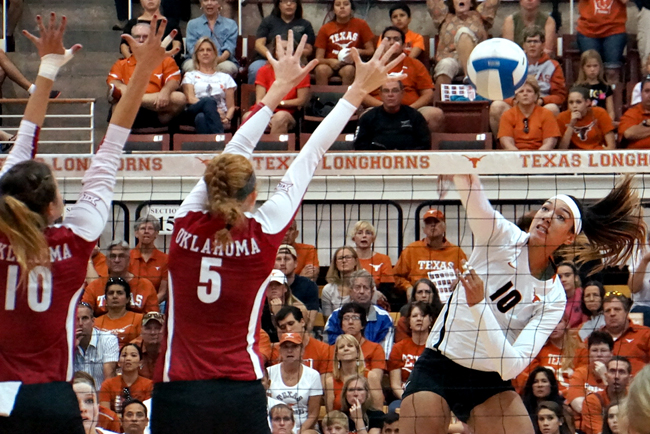 “It’s an honor to win [the Big 12 Championship],” head coach Jerritt Elliott said. “It’s a great conference, and it’s very hard to do when you play a true double-round robin. … We are really excited to be able to win that championship and add another year to our banner.”

The win wasn’t easy, though, as the Sooners gave Texas trouble throughout the night.

In the opening set, the Sooners took a 10-7 lead early, but the Longhorns tied the score four times after that. Oklahoma wouldn’t be denied, and the Sooners won the first set, 25-22.

Texas fought back in the second set to best Oklahoma 25-18.

After intermission, both teams battled in the third set with neither squad able to break away from the other. But, after a 15-15 tie, the Sooners went on a 4-1 run and ended up claiming the set, 25-21.

The fourth set started like the third set, with neither team willing to give in. But, with their backs against the wall, the Longhorns pulled out a 25-17 win and forced the match into a decisive fifth set.

The fifth set was all Texas. The Longhorns opened up with a huge 10-3 lead and never looked back, winning the set, 15-5.

Although the Sooners gave the Longhorns a challenge, Elliott was proud of his team’s late-game resolve.

“We weren’t in rhythm for a lot of the match,” Elliott said. “We struggled, but I thought our team did a good job of fighting back. Most importantly, we just started fighting at the end of game four and into game five. It showed a lot of grit.”