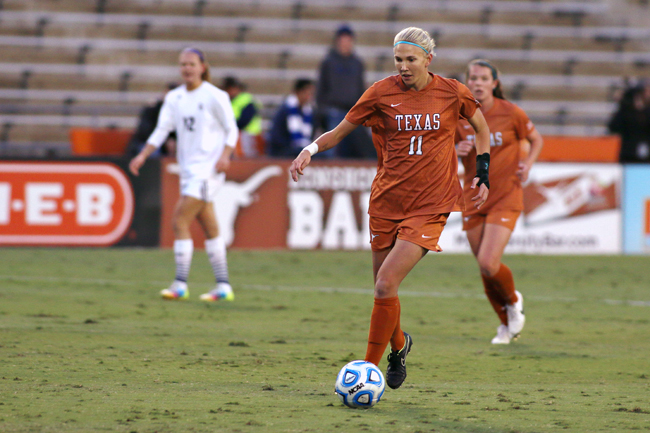 Texas soccer overcame frigid conditions Friday to knock off the Rice Owls, 3-0, in Austin and win its first NCAA tournament contest since 2011.

The two teams traded possessions throughout the first half, but junior midfielder Sharis Lachappelle got the scoring started.

Lachappelle found her way to a ball that was ricocheting around the Rice box and whipped a shot past the outstretched arm of Rice senior keeper Amy Czyz. That 29th-minute score proved to be the only offense Texas needed.

“I think it settled us down a little bit because we were playing a bit frantically,” sophomore defender Julia Dyche said. “When Sharis scored, we were like, ‘Okay, we need to settle down. We’re ahead, and we need to play better.’ That was a huge goal for us.”

In the second half, the Longhorns cranked up the heat and turned the hard-fought match into a beatdown.

“I think I just challenged them a little bit,” head coach Angela Kelly said. “To be honest, I just cut to the chase about this being a first-round NCAA match. Everybody in the room was really excited.”

The Longhorns added two more goals in the second 45 minutes to put Rice away and comfortably advance to the second round of the tournament.

Freshman forward Olivia Brook started the second-half charge in the 48th minute. Brook fought her way to the end of senior defender Whitney Jaynes’ long pass into the box and needed just a slight tap to redirect the ball into the net for her team-leading seventh goal of the season.

Dyche then added the knockout punch with a 30-yard blast in the 66th minute to send Texas to College Station for its second-round matchup at 3 p.m. Friday against No. 14 Notre Dame.