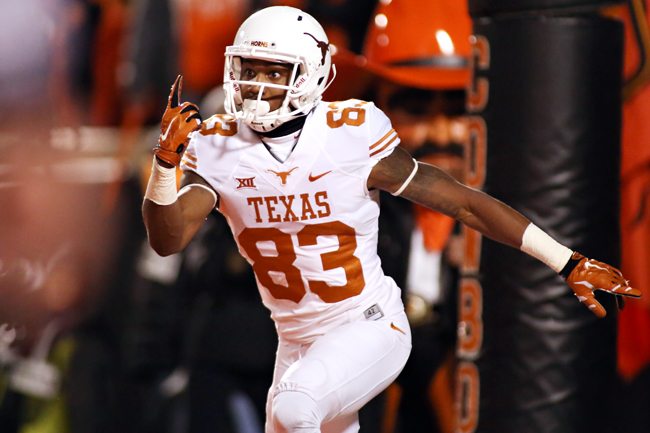 There’s always a benefit to a fresh perspective — something head coach Charlie Strong is well aware of.

Entering his first year at Texas, Strong didn’t bring preconceived notions of what works and what doesn’t. He didn’t assume stars from 2012 and 2013 would automatically be team leaders in 2014. Instead, he let each player prove himself during off-season training.

As a result, Strong has given a host of true freshmen serious playing time. Among them, wide receiver Armanti Foreman has secured his spot on the field. Playing in every game this season except the UCLA contest, Foreman has established himself as a presence on Texas’ offensive and special teams units.

Against Oklahoma State in Stillwater, Oklahoma, last weekend, Foreman learned at least one thing: what it feels like to catch a touchdown. Driving home a 45-yard reception from sophomore quarterback Tyrone Swoopes in the fourth quarter, Foreman capped off Texas’ 28-7 win. He also became the first freshman on the 2014 squad to score.

Swoopes said Foreman and the other rookies elevated their level of play Saturday.

Strong, too, commended the play.

“He made an unbelievable catch on that one that Tyrone laid out,” Strong said. “It looked like he hit another gear and went and got that ball, which was really a big catch.”

Foreman has made big catches before. Ranked as the No. 15 wide receiver in the class of 2014 by ESPN, Foreman caught 149 passes for 3,067 yards and 32 touchdowns throughout his high school career. He didn’t claim District 24-4A MVP in 2013 alone. Instead, he and his brother D’Onta, a freshman running back for Texas, shared the MVP honors. But Armanti Foreman has skills, and they don’t only extend to the offensive domain. The 2013 first-team All-District defensive back from Texas City also has a knack for throwing off defenders.

Foreman still has a ways to go. But he’s moving forward, both figuratively and literally, as he posted a career-high two receptions for 74 yards this weekend. Although he only scored directly on the second play, his initial 29-yard catch in the third quarter positioned Texas to kick a field goal. His presence on the field translates to the scoreboard quickly, and those points on the scoreboard translate to a win. Strong says many things help a program, but none more so than a win.

“Winning solves a lot of problems for you,” Strong said. “When you win games, guys start believing in the system.”