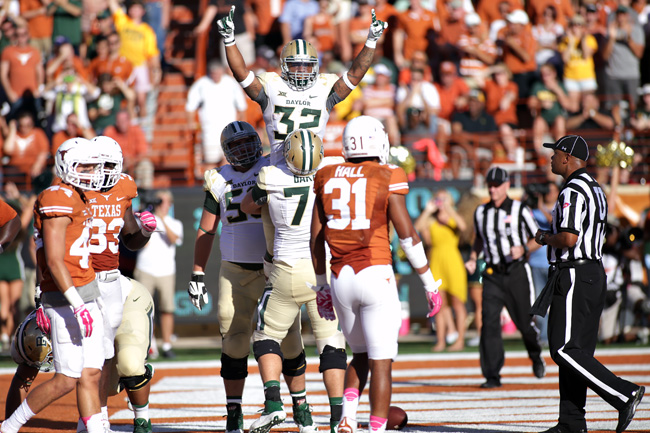 As the football season draws closer to an end, the Big 12 is winding down to three contenders.

Baylor, Kansas State and TCU are at the top of the conference standings, each having only a single conference loss, and, with only a few more weeks in the season, all three are competing for the top spot.

This past weekend, the Horned Frogs played a road game against Kansas in what was believed to be a fairly easy matchup for the highly ranked Frogs. However, TCU was forced to make a fourth-quarter comeback to keep its Big 12 hopes alive.

TCU was down 17-27 with less than four minutes remaining in the third quarter before mounting a late rally, which would lead to a 34-30 victory.

The Frogs were the only one of the top-three teams to play last weekend, but, going forward, all three will face tough games to close out the season.

Kansas State will face West Virginia on Thursday in Morgantown, West Virginia, where both Baylor and TCU struggled in previous games. The Wildcats cannot get caught sleeping in one of the toughest environments in the Big 12.

The Horned Frogs will have a bye this weekend, along with the Longhorns, before their showdown on Thanksgiving night. The Longhorns have won three straight matches and could be trouble for TCU.

In addition, Baylor will be back in action Saturday, hosting Oklahoma State in Waco. Despite several key injuries that have translated into losses this season, the Cowboys are a formidable foe with the ability to create an upset for Baylor.

The road to the Big 12 title for Baylor will not be as difficult as many think, though. The Bears have two remaining home games and a game played against Texas Tech on a neutral field to end the season. Baylor quarterback Bryce Petty has a solid opportunity step up and get the job done for the Bears.

The latest College Football Playoff rankings put TCU on top of the four leading teams in the nation. The Horned Frogs have played the toughest teams in the conference, only losing to Baylor by a field goal.

However, Baylor may have a shot to sneak past TCU if Kansas State can remain unbeaten this weekend at West Virginia. But, if the Bears can win against the Wildcats in early December, the momentum from beating another top-15 team may just be what it takes to put a Big 12 team into the College Football Playoff.