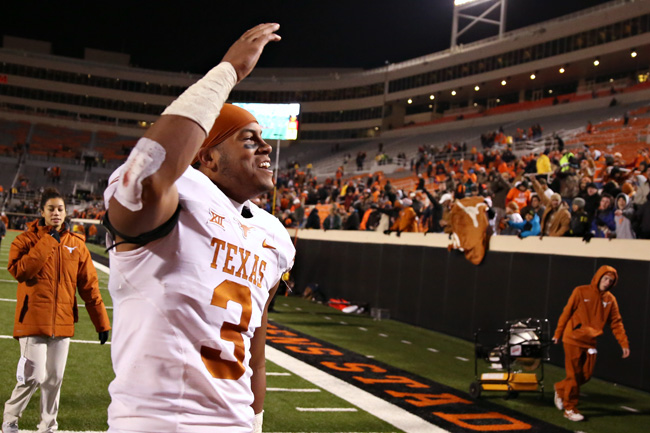 Many fans were excited about the prospects of an upset and the progression of the offense. But the crowd’s energy did not travel with the team or translate to the players on the field.

The Longhorns looked lethargic, particularly on offense, even though they only possessed the ball for one-third of the game. At the game’s conclusion, the team was left to ponder how it would avoid a similar performance in the future.

“After that game, we kind of sat in that locker room, and I expressed my feelings to the team and to the seniors,” Strong said. “It may have been the turning point for us because that was just one of those games where we kind of went out there with no emotion, no energy and just didn’t play well.”

The loss dropped the Longhorns to 3-5 and made the idea of going bowling seem impossible.

“We felt like we went out there and let ourselves down and lost,” senior wide receiver John Harris said. “We wanted to get to a bowl game, and everybody going in the media saying, ‘Hey, your season is pretty much over.’”

For all intents and purposes, many thought Texas’ season was over. The team would need to win three of its final four contests to extend its season
into December.

“There was a time in the season when it seemed hope was lost from everyone on the outside,” senior linebacker Jordan Hicks said. “But, on the inside, everybody stayed focused.”

Over the past three weeks, the Longhorns have been able convert that focus into winning results. After averaging just over 20 points per game in the first eight contests, the Longhorns scored 95 points over the course of the three-game winning streak. They surrendered only 12 points per game over that stretch, after allowing, on average, over 24 points in the first eight games.

The elevated play can be partially attributed to the mentality of the players themselves.

“I felt we didn’t believe in ourselves at first,” junior defensive tackle Malcom Brown said. “Now that everybody is believing and more confident in themselves, we are gaining a lot of confidence.”

The Longhorns have shown themselves to possess a certain type of toughness, which has been absent in Austin since 2009.

“We’ve been resilient all year,” senior cornerback Quandre Diggs said. “We could have easily packed it in three games ago and said we wasn’t going to finish the season out. But these guys continued to fight, and this is a great opportunity to continue to build on something that will get us going in the right direction next year.”