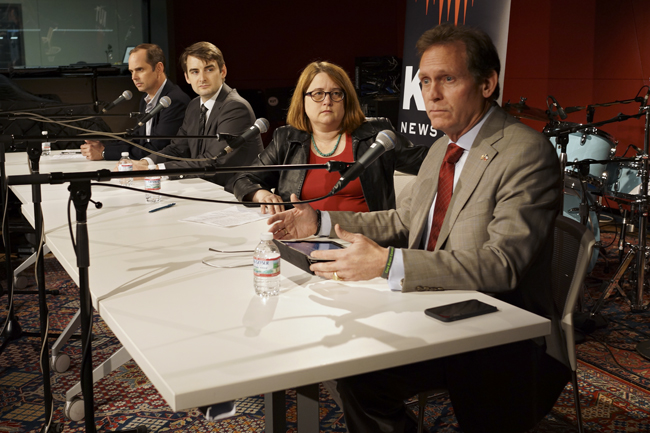 With enrollment for coverage under the Affordable Care Act now open for 2015, four panelists at KUT Studios in the Belo Center for New Media on Tuesday discussed the impact of the act so far.

The panel included State Rep. John Zerwas, R-Simonton; Bee Moorhead of Texas Impact; Sam Richardson, assistant professor in the LBJ School of Public Affairs; and Austin American-Statesman reporter Tim Eaton. The group examined the impact the health care act had on Texas communities during its first year and discussed what they hope to see in the next session.

According to Zerwas, polling shows people are not happy with what has happened as a result of the act.

“In general, the Affordable Care Act is not well received by Americans across the country and certainly in Texas, also,” Zerwas said. “If you talk to most people about it, they don’t like what it does. … More people are paying more for their insurance coverage as a consequence of the health care reform act and [are] getting less options.”

Richardson said individuals with fewer options may be uninformed.

“For those who don’t fall into the Medicaid gap, they typically get very cheap insurance coverage,” Richardson said. “For people who qualify for subsidies under the federal marketplace, they can find plans … for $40 a month [to] $60 a month. We see a lot of people able to get coverage much more cheaply.”

Zerwas said he would like to see officials come together next session to help individuals with no coverage.

“My hope is that, through this period of time, there has been more conversations with the members of the legislature, a better understanding of what this could do for their community in particular, and that we come back and have a conversation that is less tainted by politics and is more about trying to solve a solution,” Zerwas said. “I don’t care if it’s the ‘John Zerwas Texas’ solution or if it’s somebody else’s plan — we have a million to a million-and-a-half people that fall into a gap.”

Voters in Texas were not educated on what their legislatures were saying about the act, according to Moorhead.

“This time around, one of the things that advocates are committed [for] legislatures to do is to work with them and to work with their constituents to make sure people at least understand, so that, if a legislature takes the step of saying, ‘I want to do that right thing for my state,’ that their constituents are really clear that they are doing the right thing for their state,” Moorhead said.