Artist and physicist to hold discussion at Blanton 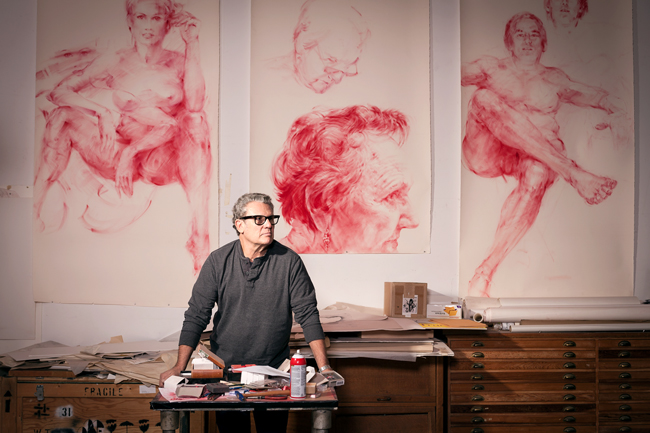 Every day for a couple of years, artist James Drake created drawings of animals, scientific formulas and everything in between. The end result was more than 1,200 drawings, which are now on display at the Blanton Museum of Art in an exhibition titled “Anatomy of Drawing and Space (Brain Trash).”

In addition to his exhibit, Drake will hold a discussion, titled “Perspectives: James Drake & David Krakauer” on Thursday, with scientist David Krakauer, the director of the Wisconsin Institute of Discovery, about how both scientists and artists imagine the future.

During the discussion, Drake, a New Mexico-based sculptor and video artist, and Krakauer will address several questions. According to Adam Bennett, manager of public programs at the Blanton, the questions will address everything from theoretical physicist Erwin Schrödinger to whether art and science will ever converge.

“It’s going to be a wide-ranging conversation about artists, scientists and creativity,” Bennett said.

Krakauer helped inspire some of the artwork Drake created for the exhibition.

“[Drake’s] excited about talking to [Krakauer], who is a friend and who has also worked in the same part of New Mexico,” Bennett said. “A conversation that David and James had is actually incorporated into Brain Trash.”

“James is very interested in science and the history of creativity, and you’ll see a lot of other references to science in the exhibition,” Bennett said. “There’s formulae and equations, diagrams of machines, even a huge drawing of an MRI of James’ head.”

For the most part, Krakauer is interested in the relationship between art and science shown in Drake’s exhibition.

“David is also interested in how creativity happens and what scientists can learn from art,” Bennett said.

Brain Trash strays from the video and sculpting projects for which Drake is better known. The exhibition, which runs Oct. 19 through Jan. 4, is a platform for Drake’s more simplistic artistic ventures.

“He wanted to experiment with paring back his technique to work on drawing,” Bennett said. “He drew literally every single day for two-and-a-half years, and the end product is this exhibition.”

Stacey Ingram Kaleh, manager of public relations and marketing at the Blanton, described Drake’s Brain Trash as personal and spontaneous.

“Drake used a stream-of-consciousness process, so the drawings reveal his preoccupations,” Kaleh said. “It is like looking inside the artist’s mind.”

Drake chose to feature Brain Trash at the Blanton because of his involvement with the museum before Brain Trash.

“James is originally from Texas; he’s been a friend of the Blanton for many years — had a career retrospective published by UT Press,” Bennett said. “So there were a lot of reasons for wanting to have this work here.”

Brain Trash has proven to be a major draw for the museum because of Drake’s name and the sheer number of drawings featured in the exhibition.

“We’ve received a fantastic response from our visitors,” Kaleh said. “It’s been great to see so many people engaging with the work.”