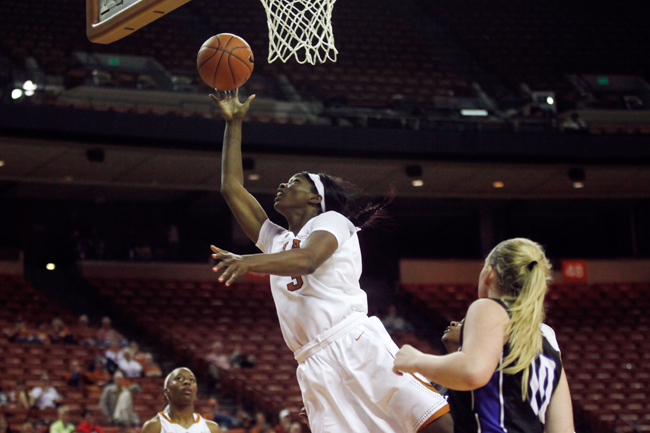 It’s not an easy schedule for No. 10 Longhorns as they begin an early two-game road trip versus ranked opponents starting Thursday against No. 6 Stanford.

Stanford is coming off an 88-86 upset of the top-ranked Connecticut Huskies on Monday, which ended the defending champions’ 47-game winning streak. In that game, the Cardinal extended its home winning streak at Maples Pavilion to 28 games.

Longhorns’ head coach Karen Aston said the west coast trip is a great opportunity to assess and test the team.

“Any time you can go play a team that will expose your weaknesses, then I think that’s what you’re trying to do,” Aston said. “You’re trying to get better every day and reach your potential. I think the only way you can do that is to get exposed.”

Thursday’s matchup between Stanford and Texas marks the fourth time both teams played one another since the 2010-2011 season. Stanford won all three games, including a 63-54 win in Austin last November.

Aston said Stanford poses a different challenge from other opponents because of how well its guards play.

“They have the ability — as everyone saw [against Connecticut] — to string you out defensively, which is something that we need to get a lot better at,” Aston said. “We’re, at times, not in the right place on defense, and I think … they can put a lot of pressure on you defensively.”

Texas won its regular season opener Saturday against UTSA 68-48 as the Longhorns pulled away late in the second half. Aston said the team looked undisciplined in the season opener possibly because of nerves or not being “amped” enough for the Roadrunners.

“That’s not a good quality of a team,” Aston said. “I think we’ll be ready to play, but have we done the work that it takes and worked on our discipline and execution enough to be prepared to play a team like Stanford?”

“We know that we can play with them,” Taylor said. “I think that we’re an even better team this year. We have more experience, and we’re a lot faster team. We can definitely compete
with them.”

Tip-off for Thursday’s matchup in Palo Alto, California, is scheduled for 8 p.m.