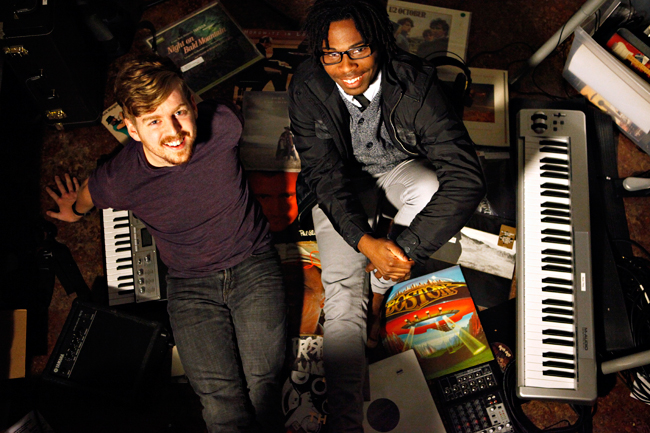 As the first notes of “Stairway to Heaven” play from the speakers at Spider House Cafe, the members of Avenue F Records stop what they’re doing to fully appreciate the Led Zeppelin song. The independent record label’s three founders, all UT students, take a special interest in creating a label that emphasizes personal connections between artists.

InfiniD Music, another UT student-run label, takes a similar approach, with a goal of working closely with artists to develop their brand. Although both labels are small and new to Austin, they hope their shared focus on producing authentic music will give them a break in the industry.

Andrew Schindler, music production senior, Michael Gonzales, drum set performance senior, and Zeke Levine, bass performance junior, run Avenue F. The label is located, not surprisingly, on Avenue F. Schindler was inspired to start the record label after attending a music business convention. After listening to one of the speakers, Schindler said he realized that, in order to have a chance of making it in today’s industry, he needed to have a more DIY approach.

“The biggest thing that pushed all of this was the idea that anyone who wants to innovate has to do it themselves,” Schindler said. “Austin is the live music capital, but there really aren’t the kind of labels you’d find in New York or L.A.”

The group works with several different types of artists whose genres span from indie to R&B. The group hopes to build a citywide community by working with multiple artists and making an attempt to become more involved with their careers.

“We’re trying to create a sense of value for music,” Levine said. “Labels used to invest in their artists and see them through albums, but now they make most of their money through commercials and licensing, which has completely changed the kind of music labels are willing to produce. We want to make good music and promote it as much as we can.”

The group believes that, because they each specialize in different instruments and come from different musical backgrounds, they can provide their artists with a sound that will set them apart. This is something each of Avenue F’s members agreed upon in order to make a name for their label.

“You see a lot of artists out there today, and you realize that it’s not even about the music anymore, it’s about so much more,” Schindler said. “We’re trying to make music the most important thing again. We want to create music that’s so good people will be willing to pay for it, even if they don’t have to.”

The growing popularity of music streaming is something that labels like Avenue F and InfiniD Music have to take into consideration because they believe many people now turn toward streaming services like Spotify rather than actually purchasing their music.

Music recording technology sophomore Dashon Moore, who later teamed up with classmate and fellow music recording senior Thomas Cardwell, started InfiniD Music, which, like Avenue F, provides services that many other record labels do not.

“Sometimes the artists that come in need help with music videos or promotional videos,” Cardwell said. “We’re kind of all encompassing in what we provide them. We want to help build their vision with them instead of just outsourcing it to other people like other record labels might.”

The group prides itself on providing a collaborative space that will help artists create as freely as possible.

“Our mission statement is helping people make the music that they want to make,” Moore said. “We just want to have an honest and open space for them to create. I don’t think music should just be a business, but it should be something that lets artists develop and get their message out.”