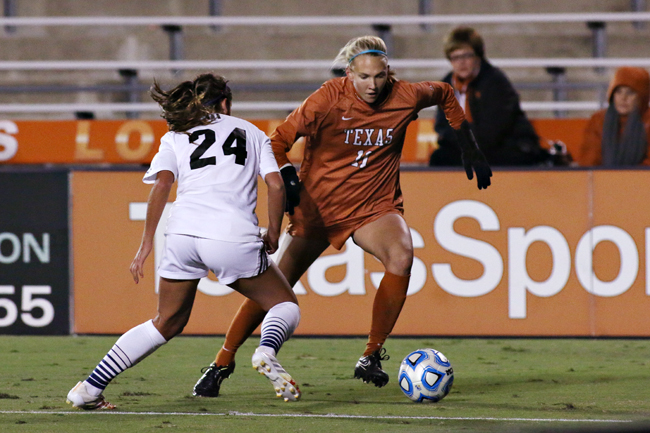 Texas soccer’s first NCAA tournament game since 2011 ended with a comfortable 3-0 win over the Conference USA champion, Rice Owls. But now the Longhorns will travel to College Station for their next challenge — a matchup against the No. 12 Notre Dame Fighting Irish on Friday.

The Longhorn attack launched a three-goal barrage last week, but the Texas offense will be hard pressed to replicate that feat against the Fighting Irish. Notre Dame’s stalwart sophomore goalkeeper Kaela Little has been solid behind the Notre Dame backline, shutting out the opposition in 12 of the 19 contests she has played in this season.

“We just know that when we get our opportunities, we will have to put them away,” senior defender Brooke Gilbert said. “We’ve played against many good goalkeepers this season.”

Fortunately for the Longhorns, freshman forward Olivia Brook looks ready to lead the Texas offense into a tough stretch of games. The team’s leading goal scorer kicked off her debut campaign by scoring five goals in five games before dropping into obscurity and scoring only one more regular season goal.

Brook, however,  has looked as good as advertised her last couple of outings. Brook tapped in a goal against Rice and came very close to scoring two more in the Big 12 Championship tournament.

On the other side of the ball, the veteran Texas backline will be well-equipped to deal with the Notre Dame offense. The Texas defense lived up to challenges against No. 1 UCLA and No. 7 West Virginia and has conceded just one regulation goal in three tough postseason games.

The Longhorn midfield,  however, could be the most essential unit in halting the Irish attack Friday. Texas head coach Angela Kelly referred to Morgan Andrews, Notre Dame midfielder and assist leader, as an “engine in the midfield.” Given enough time, the sophomore has the talent to pick apart the Longhorn defense.

However, Longhorn midfielder Sharis Lachappelle looks like the Longhorn most suited for the challenge. The senior has used her physical play to her advantage this season, even earning a caution or two along the way.

If No. 3 Texas A&M is able to knock off Arizona  at 7 p.m. Friday, a potential Sunday matchup between the old Texas foes is an enticing prospect for those who know the history of the rivalry.

“I haven’t played against them since my freshman year, so I’m really excited that there’s the potential that we get to play them again,” Gilbert said. “It’s in our blood, that rivalry. Any time Texas gets to play Texas A&M again, it’s awesome.”

Texas will have to get through another top-15 team in order to face the Aggies, but a pair of wins over a highly ranked Texas Tech team and close games against UCLA and West Virginia have shown that the Longhorns have the ability to compete with the best in the nation.