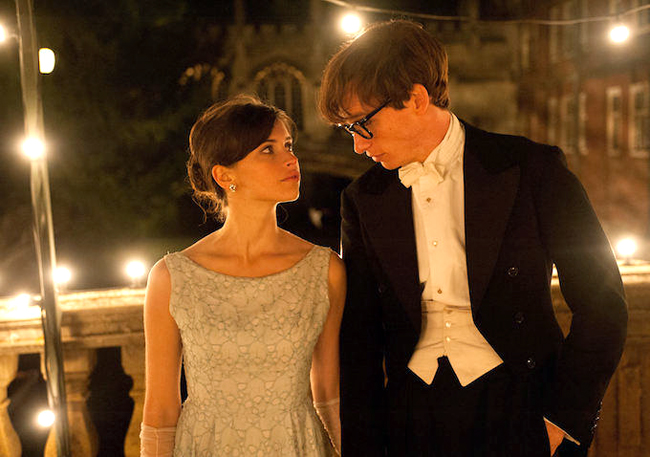 “The Theory of Everything” is a film about both failure and success. On one hand, it pays tribute to the achievements and hardships of Stephen Hawking — one of the most celebrated scientific minds of all time. On the other, it explores the slow deterioration of his romantic relationship with his first wife and greatest friend. The balance between the narratives is in favor of the romanticized account of their relationship, which ultimately displays Hawking’s life as an engaging and emotional journey.

While studying at Cambridge, young Stephen Hawking (Eddie Redmayne) meets Jane Wilde (Felicity Jones). The two bond instantly, around the time Hawking begins to develop an intricate theory about black hole radiation. Tragically, Hawking discovers his body is deteriorating because of a motor neuron disease, which shuts down his body over the course of several years and leaves him nearly paralyzed. Despite this, Stephen marries Jane and becomes world famous for his research. As he becomes more renowned, and his body continues to shut down, Stephen and Jane’s marriage begins to disintegrate. This leaves the couple wondering whether their relationship can survive both the destruction of Stephen’s body and the fame thrust upon the physicist.

The focus on Hawking’s relationship with Jane bodes well for the film because the true emotion of the movie relies on the bond between the two. It’s interesting to see the marriage develop, which makes it more devastating when it becomes inevitably clear it will not survive. Anthony McCarten’s script details both the humor and tragedy that defined the duo’s time together.

It is indeed jarring to watch the breakdown of his body. Director James Marsh does not gloss over how agonizing the disease is to Hawking. The gradual impact of the disease is subtle and disturbing. Every limp and failed attempt to create motion are painful to witness, but they make his journey feel more inspiring.

Redmayne is great at portraying the awkward yet clever demeanor Hawking possesses. The character becomes more enjoyable as he struggles with and adapts to the disease. Redmayne underplays some of the arrogance that the real-life Hawking has been accused of possessing and spends more time playing-up Hawking’s charismatic side. Jones wonderfully displays the patient struggle with her husband’s disability and success. She accurately showcases the kindness of the character, along with the sorrow she feels as she recognizes the marriage is slowly collapsing.

“The Theory of Everything” is heavily romanticized yet remains an intriguing look into Hawking’s accomplished life. The film explores the more emotional side of his legacy and does so with brilliant acting from the leads. It examines a relationship that is wonderful to watch and heartbreaking to see collapse. The combination of McCarten’s screenplay and Marsh’s direction creates a stellar look at both Hawking’s accomplishments and failures.