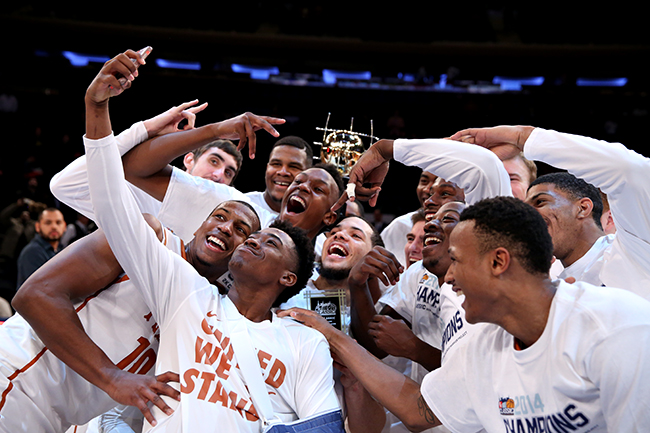 NEW YORK CITY — Just over two years ago, Texas basketball was shocked in Maui, Hawaii, by Chaminade, a Division II team. Just the thought of the game brings back bad memories for head coach Rick Barnes.

But on Friday night, that “Chaminade Crew” became the 2K Classic champions after rolling to a 71-55 victory over California in Madison Square Garden.

“Everyone bought in,” said Jonathan Holmes, senior forward and 2K Classic MVP. “Everyone wanted to be a part of the solution. We want to build something special.”

The No. 10 Longhorns dominated Cal from the opening tipoff. The Longhorns never trailed in the game, jumping out to a quick 14-4 lead. That lead grew to as much as 14 in the first half, and Cal was unable to get back in the game.

While Felix did a good job of pushing the ball in transition, he ran into some trouble with the half-court sets against the zone Cal switched to in the second half. Felix finished up with just 9 points and five turnovers but tallied four assists en route to earning 2K Classic All-Tournament honors.

“Javan really ran the team well,” Barnes said. “We knew he’d run the team. He gives us a different tempo, advancing the ball more with the pass.”

After struggling to feed the bigs against Iowa’s zone defense, the Longhorns were able to exploit Cal’s defense to get junior center Cameron Ridley, junior center Prince Ibeh and freshman forward Myles Turner plenty of touches. With that strategy, Texas forced Cal into early foul trouble both halves.

“They did a great job of utilizing their bigs,” Cal head coach Cuonzo Martin said. “They pounded the ball inside. They forced the officials to make calls.”

The Texas defense, led by junior guard Demarcus Holland, kept the Cal team out of rhythm. The Golden Bears entered the game as the nation’s quickest offense and hadn’t scored fewer than 73 points a game this season. But, with Holland shadowing junior point guard Tyrone Wallace, the Longhorns held Cal to 20 field goals on 31 percent shooting. Texas ended the night with three steals and 10 blocks, highlighted by Ridley’s rejection that sent the ball flying four rows behind the Cal bench.

“I would have given the MVP trophy to Holland,” Barnes said. “He disrupted them defensively.”

The always fundamentally sound Holmes led the Longhorns quietly, scoring a team-high 21 points and 13 rebounds. Junior forward Connor Lammert, who may be the team’s most improved player, helped set the tone for Texas. While the box score may not highlight his contributions, the offense ran through Lammert. He finished the night with nine rebounds and 6 points.

Taylor, who injured his wrist on a late-game drive against Iowa on Thursday night, watched Friday’s game from the bench, his left wrist heavily wrapped and rested in a sling.