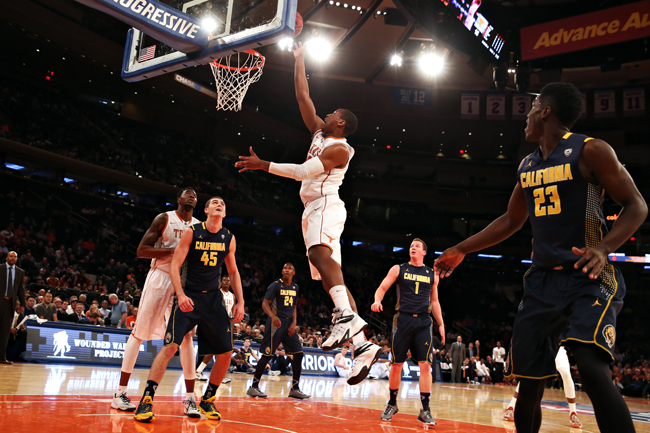 The moment you step inside Madison Square Garden for the first time, you get it.

Nestled in the heart of New York City, the place is unlike any other. There’s an undeniable buzz that engulfs the arena regardless of who is playing between its walls.

From Michael Jordan to Wayne Gretzky, Muhammad Ali to George Harrison, the greatest performers always seemed to save their best acts for the Garden. There’s a reason they call it “The World’s Most Famous Arena.”

And on Thursday and Friday nights, under the brightest lights in America’s most iconic city, the Longhorns made themselves right at home and proved they deserve their preseason billing as one of the nation’s top teams.

After a shaky opening in the first game, No. 10 Texas dominated for three halves to clinch the 2K Classic championship — its first November neutral-site tournament title since 2009.

Aside from their early issues Thursday, the Longhorns thrashed Iowa and California. It wasn’t exactly the “Murderers’ Row” of opponents, but each is a quality,
power-conference team nonetheless. Iowa is projected to be one of the better teams in the Big Ten, and California easily brushed No. 23 Syracuse aside Thursday night.

All offseason, Texas fans heard how good the Longhorns would be this year, and now there is tangible evidence. Texas’ two blowout wins in Austin against North Dakota State and Alcorn State to open the season showed little. But in their trip to New York, the Longhorns passed their first major test of the season and proved they’re a step above three of college basketball’s better teams.

Syracuse played in what were essentially two home games in front of the New York City crowd. Iowa, too, had a significant fan base in the stands for each of its games.

But in the arena in which the great Billy Joel continues to hold concerts each month, it was the Longhorns that had a “New York State of Mind,” leaving teams buzzing about Texas’ size and depth.

“I don’t know if there is any other front line in college that can match that,” California senior forward David Kravish said of the Texas big men.

Perhaps most significant was that Texas managed to win the tournament even without its best player, sophomore point guard Isaiah Taylor, on the court for the title game. Taylor went down with a wrist injury Thursday, but junior guard Javan Felix filled in admirably with 9 points and four assists in 35 minutes to keep the offense rolling.

This is the Longhorns’ first season start with four consecutive victories of more than 10 points since the 2009-10 season. That season, Texas began the year 17-0 before slumping to a final record of 24-10 and losing in the first round of the NCAA tournament. But the Longhorns have far higher aspirations this year.

The legendary Frank Sinatra summed up New York best with his lyric, “If I can make it there, I’ll make it anywhere.”

The Longhorns made it there. Now, it’s time to see whether Sinatra was right about everywhere else.