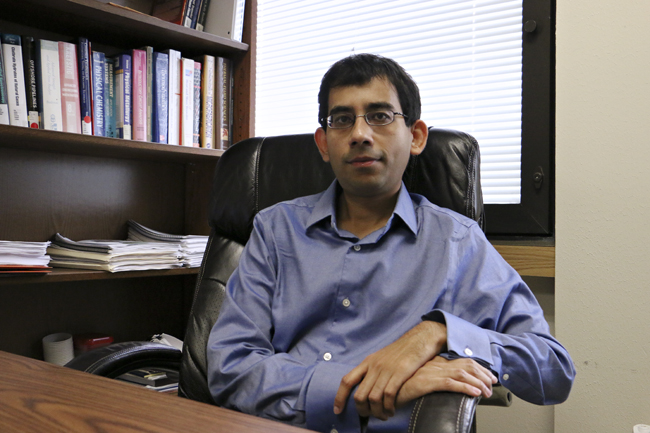 In this year’s competition, there were 40 participants consisting of universities, laboratories, industries and individuals. The results were announced at the 2014 SPE Annual Technical Conference and Exhibition in Amsterdam. Bahadur and his team finished first, followed by a team from Texas A&M University in second and a team from Heriot-Watt University in Scotland in third.

“This was an important award because it is good to have the support of the Society of Petroleum Engineering,” Bahadur said. “From here, we will continue our research so that we can put this on the production platform and show industries that the method is productive and safe.”

Bahadur and his team looked at ways to reduce oil and gas pipelines from choking up.

According to Bahadur, deposits such as hydrates, waxes and asphalts form in the pipelines, and that can block the lines and reduce production. When this happens, toxic chemicals are used to break it up in the piping. He said that, although these chemicals may help industries from losing production, the toxins are expensive to deploy and are a safety hazard.

Bahadur, who came to the University in fall 2013 to further his studies after working in the oil and gas industry for the previous four years, said hydrocarbons are like two magnets in the sense that anything between the two magnets gets squeezed out.

Arjang Shahriari, a mechanical engineering graduate student and member of the research team, said he sees other ways in which this concept could be used.

“[This technology] is also amenable to implementation and retrofitting for a variety of practical situations and has an enormous impact on the efficiency of various industrial processes, like desalination and steam generation,” Shahriari said.