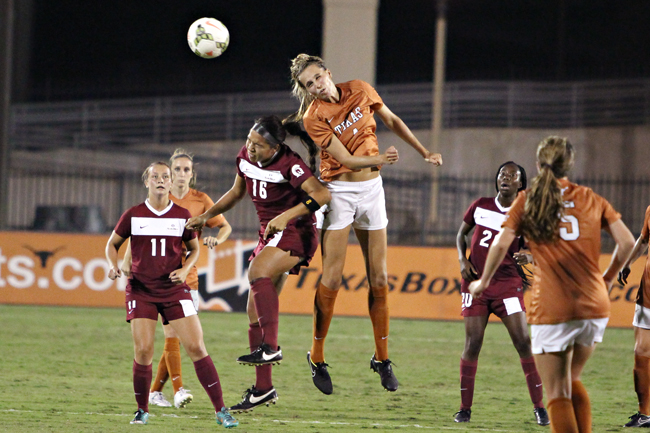 The women’s soccer season came to a close Friday with a 2-1 loss to No. 12 Notre Dame in College Station.

Texas fought hard against one of the best teams in the country, but an 85th-minute score by Notre Dame forward Karin Muya broke the stalemate and sent the Fighting Irish to a third-round match against Texas A&M on Sunday.

“Credit to Notre Dame, there was execution at the end, and that was what it was going to take,” head coach Angela Kelly said. “It was a battle. Our midfield battled with one of the top midfields in the country.”

Things looked promising for the Longhorns early on, as the Texas backline, which has been solid all season, continued its tough play Friday. The defenders stifled the Irish set pieces, and a sliding clearance by senior defender Julie Arnold kept the Irish off the board for much of the first half.

A goal by junior midfielder Lindsey Meyer just after the 19-minute mark gave the Longhorns an early advantage. Senior midfielder Sharis Lachappelle floated a pass from the left corner that sailed to the far post in position for the 5-foot-9 Meyer to nod a shot into the back of the net for a 1-0 lead.

The Longhorn defense looked like it would hold the Irish scoreless for the rest of the first half, but Muya’s 42nd-minute cross found Notre Dame forward Anna Gilbertson, who whipped in a shot from 9 yards out to knot the game up just before halftime.

The second half looked like it would remain deadlocked, as the Irish did not manage a second-half shot until the 63rd minute.

Then Muya, the Notre Dame freshman phenom, struck again. A long floater from the left boundary sailed over the Texas defense and fell right at Muya’s feet. She fired a shot that squeezed just inside the left post to break the deadlock with five minutes to go in regulation.

Ensuing Texas attempts to equalize sailed wide, and the roller coaster 2014 season ended with the Irish taking away a 2-1 comeback win.

The loss was the last match for some of the Longhorns’ most important contributors on the season. The backline will graduate starters Arnold and senior defenders Brooke Gilbert and Whitney Jaynes. Midfield stalwart Lachappelle will graduate, too.

“I’m really proud of our senior class and the strides that this program has made in the short time we’ve been here,” Kelly said. “We are going to use this as a platform to
go forward.”