300: Job as a bus driver means more than the daily route 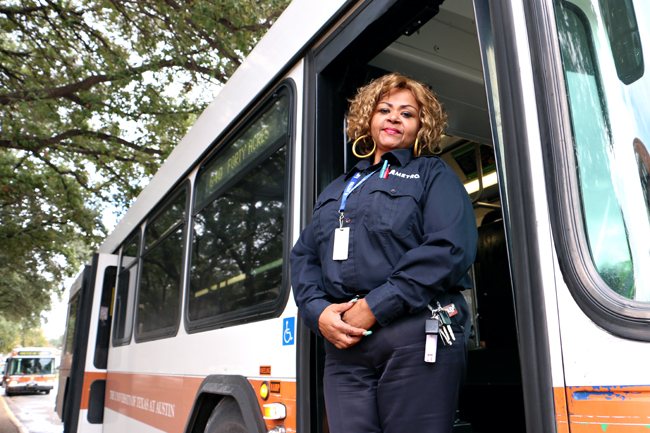 Frazzled students take refuge from the rain underneath the bus stop. The walk to class never seems as trial-ridden as it does on days like these. Coming around the corner, maneuvering the monstrous 40 Acres shuttle with a bright smile, is Paula Law Williams.

How Williams became a bus driver begins with a love story in Pittsburgh.

There was a boy from one town over. After a few hours of talking, she gave him her phone number and address.

When she got home that same day, there was a teddy bear and flowers waiting for her. After months passed, she followed the boy to Austin in 1997.

Soon, there was a marriage between the two and now they have a 16-year-old daughter.

Then, there was a threat of termination from her job at McDonald’s after she became sick. In need of a plan, she noticed the city buses everywhere and decided she had what it took to learn how to drive the massive vehicles. There was a job opening at Capital Metro. Williams applied and has worked the buses for the past 14 years.

There is a love of daily human interaction that makes Williams’ job a perfect fit — despite her employers’ rules about no conversing with travelers.

“As far as I’m concerned,” Williams said. “The students are like my own children, and I’m going to take care of them.”