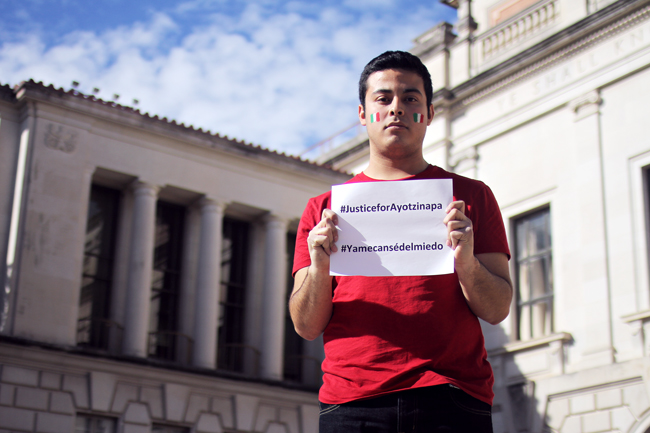 Three years ago, history freshman Dan Luiton’s uncle disappeared in Mexico. When Luiton heard about 43 students who went missing in Mexico over a month ago, he said it hit close to home.

The case of the missing students of a rural teaching college in Ayotzinapa has sparked global attention. It is suspected that the students were kidnapped during a mass protest and handed over to a local gang by police. Many universities, including MIT, Boston University and Harvard, recently made a video together in support of finding justice for the missing students. Luiton said this video inspired him to make a similar one at UT.

“I was like, ‘Where’s UT? UT should be there because we’re in the South,’” Luiton said. “I was thinking we should bring more people to this cause.”

After seeing the video, Luiton started the “#Ayotzinapa UT” initiative on Facebook by inviting students to help him make a video in support of seeking justice for the Mexican students. The group, which is composed of about 30 members, plans to produce a video by the end of the semester. Undeclared freshman Devany Cantu used to travel to Mexico every weekend with her parents but said they stopped going when the gang violence worsened. She said she joined the initiative because of this experience.

“I wanted to join as a way for me to contribute in any way — whether it’s speaking my mind that would help this cause,” Cantu said. “Just knowing that there are students speaking up for Mexico can allow the word to be spread.”

Luiton said the main purpose of the video is to inform people because he thinks the news is not informing people enough on the issue. In the video various students will hold up posters saying, “#Justice for Ayotzinapa.” He also plans on having them hold up signs numbered one through 43 each, representing one of the missing students.

“[The news] is just hiding it,” Luiton said. “I just want to raise awareness. People need to know about this. We want justice.”

Santiago Rosales, business and economics freshman and member of Student Government, said he joined the initiative because he believes SG can do something to support this cause. He cited a one-day fundraising initiative called “Hold Up for Haiti” put on by SG and more than 15 other campus organizations in 2010 as an example of a
successful initiative.

“I myself am of Mexican heritage, so to know that students who are pursuing similar interests in a similar institution to that of UT down in Mexico aren’t able to do so because of political and organized crime reasons is a very detrimental thing for me to hear,” Rosales said. “I believe that Mexico deserves justice for the crimes that were committed against the people. We, as students who do have the freedom to express — we have an obligation to do so.”

Through the sharing power of social media, Rosales hopes the video will go viral.

“Given that we are in a different country and we don’t have any legislative authority or any voting rights in Mexico, we can’t do anything politically,” Rosales said. “Voicing our opinions in support and in unison with all university students across the globe is a very powerful statement that we can make.”

Luiton, Cantu and Rosales hope that the video will bring them one step closer to getting justice for those who have disappeared in Mexico.

“We’re just letting everyone know that we’re here ,and we know what’s happening, and we’re tired of it,” Cantu said. “We’re standing up for others.”