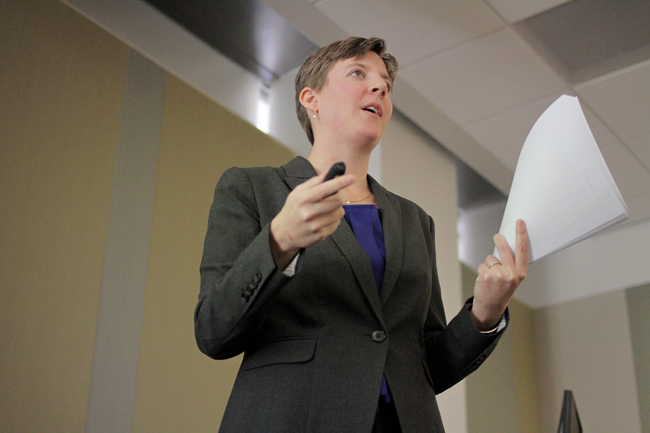 A Wake Forest University assistant professor spoke Monday at the College of Liberal Arts Building about how racial tensions impact the passage of welfare programs.

Hana Brown, who works in Wake Forest’s Department of Sociology, examines in her new book, the racial and political impact of the Welfare Reform Act of 1996. Brown used a comparison of racial situations in Georgia and Arizona in the early 1990s to show their influence on the passage of the act.

Within these issues, Brown’s focus was on punitive states, such as Georgia and Arizona, that enforced tougher welfare laws, while Alabama and California laws were more lenient.

Brown said the issue that led to the passage of the act in Georgia was the state flag. According to Brown, Zell Miller made the issue a priority of his office when he became Georgia’s governor in 1991. Although the flag issue may not appear to relate to welfare programs, Brown said that it raised racial tensions.

“At the time, more and more people were getting involved in this issue,” Brown said. “People in the African-American community were so outraged that groups of students stood on the steps of the Georgia Capitol burning the state flag. As a result, whites became upset.”

According to Brown, white people sent letters claiming they lost trust in the governor and were threatening to vote against him. Brown said the letters to the governor were often racially motivated. Eventually, Miller’s philosophy began to shift and he supported more restrictive welfare laws.

Brown said in the early 1990s, racial issues guided Arizona laws on immigration. According to Brown, the issues of the 1990s led to the passage of Senate Bill 1070 in 2010 in Arizona, a bill that put stricter restrictions on illegal immigration.

“Arizona had a very similar feeling,” Brown said. “Most of their feelings dealt with the immigration and you could sense the animosity toward Latinos. A feeling was created that those who should be receiving entitlements are whites.”

As a result of this, Arizona implemented more restricted laws toward its welfare programs.

Sociology professor Jennifer Glass said she found it interesting how gender is not an issue in these studies.

“It is amazing to me that of the issue of gender and even children have not been brought up,” Glass said. “It is fascinating that the people who are involved in these programs were not mentioned in the letters and they are simply ignored.”