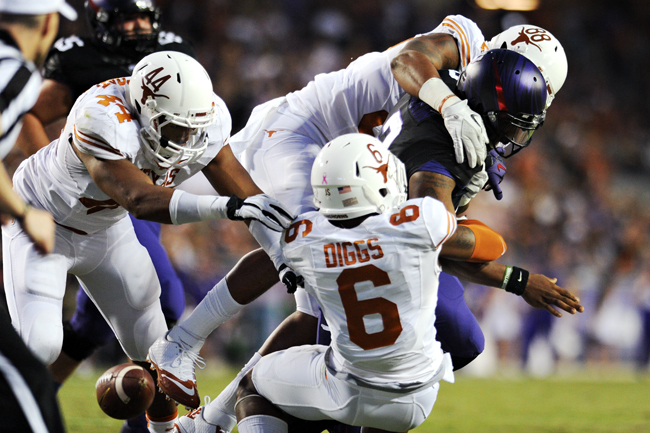 In 2013, Boykin became the first TCU player ever to tally a 100-yard rushing game, 100-yard receiving game and 200-yard passing game. In 2014, he made the permanent move to quarterback, and he quickly vaulted himself into the Heisman conversation.

His incredible skill, in combination with the story of his broken, blended family, led Sports Illustrated to take interest in the Dallas native. Its Nov. 17 magazine devoted five pages to Boykin’s role with the Horned Frogs.

“Led by Heisman hopeful quarterback Trevone Boykin and the eighth-ranked passing attack in the nation, TCU hasn’t simply caught up to the Big 12,” said the subhead of Lindsay Schnell’s article. “It’s hoping to make the jump from 4-8 to the final four.”

The teaser underplays the story’s focus on Boykin. He is unquestionably the central character of the story and his team. As reporters write his story, they often start with anecdotes from an earlier time in Boykin’s life, long before he arrived in Fort Worth.

Much of the coverage of Boykin’s ascent circles back to West Mesquite High School, where Boykin combined for 4,729 yards of total offense and 58 touchdowns. A dual-threat quarterback, Boykin’s production was split between 1,799 rushing yards and 30 rushing touchdowns and 2,930 passing yards and 28 touchdown tosses. That production garnered him attention as Rivals’ No. 24 dual-threat quarterback in the nation and No. 5 in the state of Texas. High school coach Mike Overton described his excitement when he first saw Boykin’s arm.

Throughout his time in college, however, that gold mine has really flourished. As the quarterback’s numbers have continued to improve, TCU head coach Gary Patterson doesn’t appear to be the least bit surprised.

“For two years people have been telling him he can’t play quarterback and we’d never win,” Patterson told The Dallas Morning News. “He’s like anybody else I know with fire in him. They’re going to try to prove people wrong.”

Boykin has proved most of his critics wrong. At season’s start, many questioned whether he’d be able maintain his role as quarterback or return to wide receiver. Ten games and nine wins later, Boykin’s still behind center.

He also leads the Big 12 in total offense, producing 359.6 yards per game — third-highest average in the country. And should he keep it up, he’ll join Heisman trophy recipients Robert Griffin III and Johnny Manziel as the only players since 2009 to average more than 300 yards passing and 50 yards rushing each game. He’s also vying for a Heisman — TCU’s first since 1938.

“When crunch time happens, he’s going to make the plays he needs to,” TCU junior receiver Kolby Listenbee told The Dallas Morning News. “We all support him. He’s our leader.”

As their leader, Boykin will aim to steer the Horned Frogs to victory in Austin this weekend. Texas knows it will have its hands full.

“A couple years ago, he was just the guy on the run,” senior defensive end Cedric Reed said. “Now, he’s the full package. He can throw the long ball, the short ball; he can run it. He’s reading the defense well. He’s just become a complete quarterback in a running back’s body.”