By The Numbers: TCU 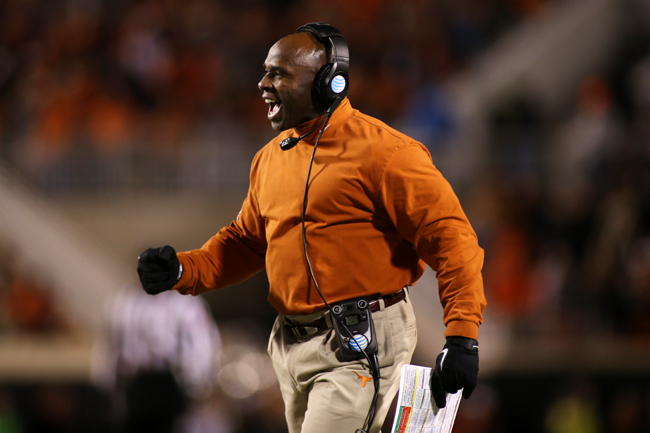 51-23-2: Texas’ all-time record on Thanksgiving, a win percentage of 67 percent. This is only the second game the Longhorns have entered with a 6-5 record. They previously beat Pittsburgh in the 1987 Bluebonnet Bowl to finish the season at 7-5.

64-21-1: The all-time series record between Texas and TCU, in the Longhorns’ favor. The Longhorns have not dropped two out of three in the series since 1967.

15-9: Texas’ record against the Horned Frogs when TCU enters with more wins.

1967: The last time the Longhorns failed to win consecutive games against the Horned Frogs.

1.4: The average turnover margin for TCU on the season — the best margin in the Big 12. The Horned Frogs have forced a league-best 28 turnovers while only losing the ball 14 times.

541.6: The average yards of total offense produced by TCU this season, second most in the Big 12. The Longhorns only average 366.9 yards of offense per game, ninth in the conference.

24: The number of receiving yards senior wide receiver John Harris needs in order to reach the 1,000-yard plateau. Harris would become the sixth player in school history to hit the mark and the first player to do so since Jordan Shipley did it in 2009.

8-0: The Longhorns have a perfect record in games in which senior wide receiver Jaxon Shipley has attempted a pass. Shipley has thrown two of his eight attempts on Thanksgiving Day.

252: Senior linebackers Jordan Hicks and Steve Edmond have combined for 252 tackles this year and enter the game against TCU ranked second and third, respectively, in the conference in tackles.

6: The number of interceptions by TCU safety Chris Hackett this season, most in the Big 12 and tied for fourth most in the nation. The Horned Frogs have picked off 17 passes thus far, which is tied for the sixth most in the country.