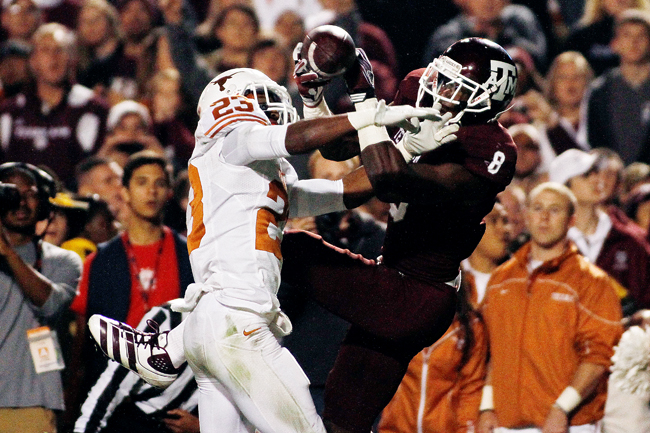 Over the past 11 months, much has changed within the Texas football program.

After the departure of Mack Brown, Charlie Strong came into Austin with his own staff and has worked to change the Longhorns’ culture and attitude.

Its been a welcome change for much of Longhorn nation, but, especially around this time of year, there’s one tradition many wish would be restored.

For 96 years, Texas and Texas A&M met every year on Thanksgiving weekend in a matchup that quickly turned into one of the biggest college football rivalries in the nation.

But in 2011, the Aggies left the Big 12 for the SEC, ending the annual contest between the two schools.

Since then, Texas has tried to replace the rivalry by substituting in other in-state schools, but it simply isn’t possible to replicate such a game.

For the sake of football in Texas, and, in the best interest of both universities, the rivalry must return.

In the Longhorns’ first season without the Aggies in the Big 12, they faced TCU at home on Thanksgiving. Texas lost, and the game-day atmosphere was noticeably different, lacking any spark or excitement.

Last season, Texas Tech came to Austin, and, despite the Longhorns’ victory over the Red Raiders, the environment didn’t nearly equal that which was common against the Aggies.

And while rivalries take time to develop, the Longhorns will be hard-pressed to find one similar to what they had against Texas A&M. The tradition and rituals behind the “Lone Star Showdown,” as it was branded, stretch far into the history of both universities and had made their way into family traditions across the state.

Since 1915, the rivalry provided a link between the two most prominent state schools. With the two institutions just over 100 miles from each other, the annual contest provided a cultural connection between Longhorns and Aggies, within families and friend circles.

In addition, since the rivalry ended three years ago, there has been a constant “what-if” factor between both schools.

Without any way to be certain, Longhorn and Aggie fans argue that their respective school would win a head-to-head matchup each year. If the rivalry is renewed, there will be no need for debate.

This year, albeit either school’s doing, there is a very real possibility Texas and Texas A&M face each other in a bowl game.

While both school’s administrators have their own reasons as to why the rivalry likely won’t be rekindled anytime soon, it is a common opinion among fans, players and even coaches that Texas should face the Aggies once again.

“That’s political,” defensive coordinator Vance Bedford said. “One day, if you ask me not as a football coach and as a former University of Texas football player, it would be a totally different answer, but politically, I’m not supposed to speak on that. Therefore I’m going to take the fifth.”