Value of Thanksgiving is personal, not historical 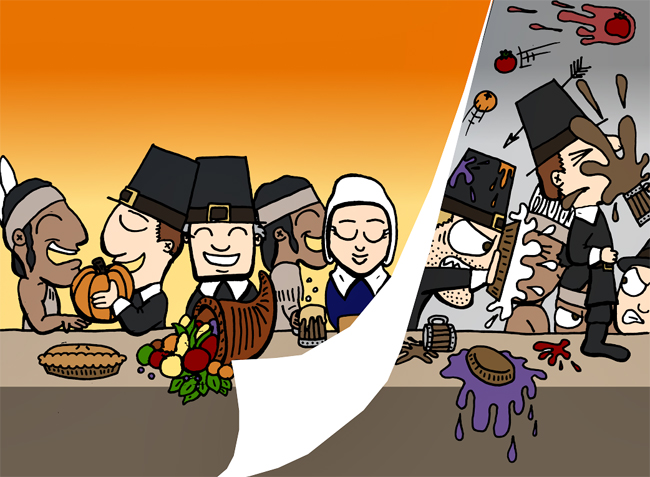 Before we roll out the welcome wagon that is Thanksgiving turkey, mashed potatoes, green beans and pies, a word must be said on November’s best holiday. It’s a wondrous time.

It’s a time to give thanks, but for what? Family, yes. A warm bed at night? Of course. But certainly not because of the historical significance of the holiday. When the Pilgrims arrived on American soil, they took the liberty of taking land and food from the Native Americans. The notion that our forefathers shared a home-cooked meal, complete with Native American-British fusion food, is a myth. We came, we saw, we conquered.

The idea of hospitality is also one that was manufactured by American popular culture. The Pilgrims didn’t invite the Native Americans to their feast. In fact, the Natives only showed up because they were responding to the gunshots and cannons that were being fired by the Pilgrims during the meal.

If none of this has resonated with you yet, you should know now that turkey wasn’t even served at the first Thanksgiving. Most of the knowledge of the Pilgrims’ meal comes from colonialist Edward Winslow, who wrote “Mourt’s Relation: A Journal of the Pilgrims at Plymouth.” Winslow wrote that they gathered wild fowl for their celebration and nowhere in his records is turkey mentioned. If that doesn’t turn your world upside down and inside out, I don’t know what will.

The propagation of the false geniality behind the first Thanksgiving is due in large part to the crafting of hand turkeys and story time featuring valiant pilgrims and generous Native Americans. Elementary schools all across the country are guilty of filling the time between Halloween and Thanksgiving with lessons about the Mayflower and the first Thanksgiving, extolling the virtues of our brave forefathers in the process.

Luckily, many of the reasons people celebrate Thanksgiving are devoid of anything Pilgrim-appreciation-related. Young children know the theory behind why they celebrate the holiday, but when it comes time to sit down at the table and eat, most of what people are thankful for is more personal. The holiday is a time to be with family and friends and overindulge in every food imaginable, not celebrate the actions of early white Americans.

Berkeley is a Plan II and public relations sophomore from Austin.